This is an excellent "first year" production Colt AR-15 semi-automatic rifle with its original and unaltered parts. It has the early style upper receiver with no provisions for a forward assist and the correct early Colt "small C" proof inside a square. The lower receiver has the Colt four line makings with the four digit serial number "SP01125" indicating production in mid/late 1964, the first full year of Colt AR 15 production. It is fitted with the early original Colt marked parts such as the original non-chrome lined barrel, stamped "12" on the front underside, indicating it has the early 1 X 12 inch rifling twist. The right side of the barrel is stamped with the correct commercial proofs of a single "M" next to the Colt Commercial "VP" proof. The barrel is fitted with the early three-prong flash hider. It has the early commercial Colt M16 type bolt carrier that lacks the cut on the underside with the larger hole in the side for the early solid head machined, steel firing pin and retaining pin. The bolt is also the early Colt version that is all chrome plated. It retains its original internal parts with the early style selector switch that has the small machined hole on each end of the switch. It still retains its original first generation (and very rare) old style, large head, two-piece type recoil buffer. It is also fitted with it original black plastic pistol grip, early triangular handguards and early style buttstock. The stock is also the early version that lacks any provisions for the internal storage compartment, that is correctly fitted with a solid rubber/plastic buttplate with no provisions for the later trap door. Complete with one original Colt marked AR-15 20 round magazine.

Excellent with 99% of its original Colt parkerized/anodized finish on all the parts with minor wear. The bolt assembly retains 99% of it’s original chrome plated finish. The plastic components are excellent with only minor handling marks. Mechanically excellent. This is probably one of the finest early Colt AR15's we have had for sale. 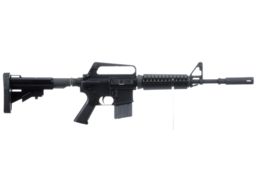 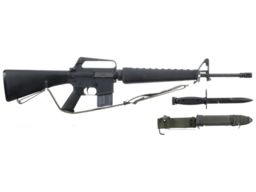 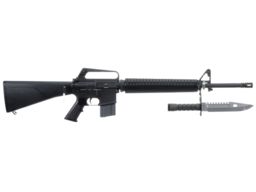 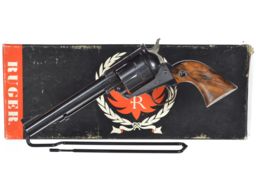 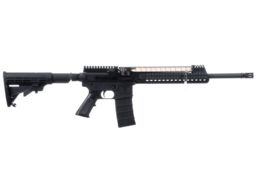 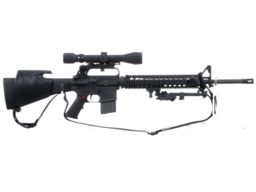