This is an outstanding example of the small groups of Savage Arms prototype test pistol that Rock Island Auction has the pleasure to offer to the collector of rare and scarce early semi automatic pistols. The specific patent drawings and detailed historical explanation of this unique pistol can be found in several of the collector reference books on Savage Arms, one of the best books is titled "Ten Quick Shots The History of Savage Arms" (with the information on pages 10-15). This unique and rare pistol is a one of a kind semi-automatic that was designed by Elbert Searle, inventor and chief designer of all the various Savage Arms pistols to include the later 45 Cal Savage Model 1905 pistol that was submitted for the U.S. Army Savage Arms test pistol. This outward configuration of this example is very similar to the early "Grant-Hammond" semi-automatic pistol. This example like many of these early 1900 era semi-automatic pistols has several very unique designs including a fixed barrel/upper receiver that reciprocates reward when fired (similar to a 1896 Mauser or 1914 Nambu pistol), one piece investment cast type frame, two piece slide and bolt magnificently put together, a rare and seldom seen early version of the "staggered double box" magazine (very similar to the later Browning High Powers, Beretta, and Glock magazines like all the current semi-automatic pistols), and lastly it is chamber in a 38 ACP cartridge, which was just being developed in Germany at that time. This specific pistol like the other Savage Arms prototype pistols we have for sale was originally sold off (accidentally) after WWII when the company moved from Utica N.Y., to Mass. And sold off a large amount of office and production equipment. This pistol was stored inside a locked safe the company sold and was discovered later after the safe was opened. At that time the pistol was missing some small internal parts which were later hand fabricated so that it could be assembled into a more complete pistol. Not withstanding that this is and still is a one of a kind prototype pistol.

Extremely fine (as partially restored, see above) unfinished in the white metal finish with some of the small parts (grip screws, trigger, takedown lever etc.,) having most of a niter blue finish. The grips are very fine with beautiful fine line checkering. Mechanically functions in regards to slide retraction, but does not engage striker mechanism. Certainly another ultra rare prototype pistol that could be a center piece of a high end semi-automatic pistol collection. 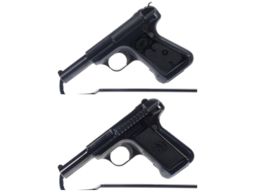 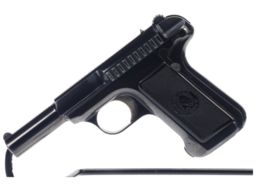 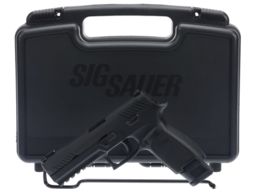 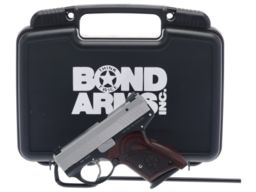 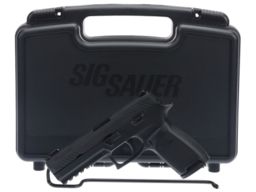 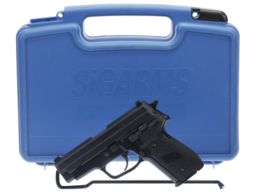