Presented before you is one of the most important, impressive and significant revolvers ever to be offered for public sale. This cased revolver embodies all the characteristics of an investment grade collectable firearm: beauty, intrigue, rarity, desirability and unparalleled historical significance. It is with both great pleasure and honor that we at Rock Island Auction Company offer this benchmark revolver back to the collecting fraternity. The 9" barrel with German silver front sight, proudly exhibits the standard snake and star roll marking "Patent Arms M'g Co. Paterson, N.J.-Colt's Pt.". Shell carved ivory grips. Brightly polished steel with blue finish with the frame, hammer and back strap casehardened. Accompanied by its original factory casing of varnished mahogany with standard beveled lid. Full compliment of accessories including matching extra cylinder, also bearing serial number 515, and brass capper marked "No 123" inside the lid and on the surface of the interior. Wood core to ball portion of the combination powder and ball charger with "99" marked on each of the copper halves. Escalloped German silver escutcheon inlaid on lid of case. This revolver was first offered for sale in 1938 a catalog put out by the Far West Hobby Shop located at 406 Clement Street, San Francisco CA featuring the David L. Ingalls Collection in which this very Paterson revolver is described: G1419 COLT-PATERSON LONG BARREL "TEXAS" MODEL WITH LOADING LEVER, CASED……………..$1650.00 9" OCTAGON BARREL with PERFECT BORE 36 cal. 5 shots. ONE-PIECE IVORY GRIPS CARVED WITH SHELL DESIGN AT ROUNDED TOP SECTION. Concealed trigger. LOADING LEVER UNDER BARREL WITH HOOK-SHAPED SPRING CATCH AS IN WALKER MODEL. At the muzzle A SILVER BAND IS INLAID AROUND THE BARREL. 2 bands of silver are INLAID IN THE BREECH OF THE BARREL. On under side at loading lever screw and at the catch spring are 2 more SILVER INLAYS. Cylinder engraved with scene of stagecoach holdup. In a rectangle marking the beginning and end of this scene is engraved the name, "COLT," in Roman type letters. . . .Here is the realization of an arms collector's dream - an outfit that will stand for all time as the very TOPS is any exhibit at Colts. Every factor that contributes to the valuation of an antique firearm is outstandingly apparent in this magnificent Texas-Paterson - Age, Historical Interest, Beauty, Condition, Pride of Possession, Great Demand, Extreme Rarity, etc. In our opinion, this is the most desirable Colt outfit ever offered for sale at any time. Aside from the fact that it will be some collector's most treasured arms possession, it will also prove a gilt-edged investment for the future. ENTIRE OUTFIT IS EXTREMELY FINE, THE REVOLVER ESPECIALLY SO. Plate No. 9 This cased set was then subsequently purchased from the Far West Hobby Shop by Mr. William M. Locke, in whose collection serial no. 515 remained for decades. Texas Paterson Colt revolvers are seldomly observed today. The fact being that 150 were bought by the U.S. government for the Navy. Further, the Republic of Texas purchased 180 Texas Patersons (with 9-inch barrels) for its Navy. Consideration should be given to the fact that Texas Paterson revolvers served as the immediate predecessor to the Walker Colt, and both are extremely important in the evolution of Colt firearms and the evolution of repeating firearms. Furthermore recent decades have seen several examples of the No. 5 Texas Paterson leave private hands and enter into public institutions' collections. Among the institutions which boast these rare and sought after arms are The Metropolitan Museum of Art, The New York Historical Society, the Smithsonian Institution's National Museum of American History, the Woolaroc Museum (Bartlesville, Oklahoma), the Raymond Baldwin Museum of Connecticut History, the Wadsworth Atheneum (Hartford, Colonel and Mrs. Samuel Colt Collection, a bequest of Elizabeth Hart Jarvis Colt in 1905), the Autry Museum of Western Heritage (now known as the Autry National Center of the American West), the Cody Firearms Museum of the Buffalo Bill Historical Center, the National Cowboy Museum and Western Heritage Center, and the Paterson Museum (Paterson, New Jersey - cradle of the revolver and birthplace of Paterson Colt production). Considering the fact that Paterson firearms are disappearing into museums, and considering all other aspects of rarity and significance, the quite desirable Colt Texas or Holster Model No. 5 Paterson Revolver, no. 515 is within the ranks of the most sought after of Paterson Colt revolvers. The Holster No. 5 or Texas Paterson Colt Revolver, serial no. 515 is well deserving of a place in a discriminating collection of Colt percussion revolvers. This is a rare and well-documented example of a seldom observed variation with round back cylinder, six silver band inlays and the scalloped German silver escutcheon inlay on the case lid. Also important in determining rarity is the fact that the German silver or silver banded Texas Paterson revolvers are significantly more rare than Texas Paterson revolvers with German silver or silver band inlays and hand engraving. It is also important to recognize that serial no. 515 was selected to be featured in the historic landmark Wadsworth Atheneum Museum of Art loan exhibition, "Samuel Colt Presents" (November 1, 1961 to January 1962), and pictured in the book accompanying that event, of the same title. Of further merit this important Texas Paterson comes from one of the most famous of all Colt Collections of William M. Locke whose collection amounted to approximately 40% of "Samuel Colt Presents." Texas Paterson No. 515 can be found in the following books and periodicals: R.L. Wilson, American Arms Collectors Percussion Colts and Their Rivals The Al Cali Collection, pages 2-3. G. Charter Harrison, Jr., The Gun Collector, issue 39, "The William M. Locke Collection," page 659. Sellers, Frank, Colts from the William M. Locke Collection, page 41. Wilson, R.L. Colt Handguns, (Japanese; pages 2-3). The Paterson Colt Book, Featuring the Dennis A. LeVett Collection, pages 148-149, and pages 286-287. The Colt Heritage and Colt An American Legend, page 2. Samuel Colt Presents A Loan Exhibition of Presentation Percussion Colt Firearms, page 15 (lent by William M. Locke).Wilson, R.L. and R.E. Hable, Colt Pistols, pages 13, 18, 19. Provenance: David L. Ingalls (pictured in Far West Hobby Shop catalog, item G-1419) 1938 William M. Locke L. Allan Caperton George Repaire Al Cali- 2011 Property of a Gentleman

Excellent overall. Barrel address, cylinder scene are sharp, crisp and clear. 98% bright original blue overall remains. The casehardened frame is extremely fine with shadows of the casehardened pattern. The grips are excellent exhibiting a pleasant aged mellow patina. The case and accessories are excellent to mint. A unmistakably phenomenal and profoundly significant Cased Colt Texas Paterson. The finest example of its kind. 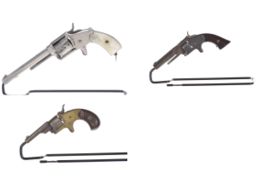 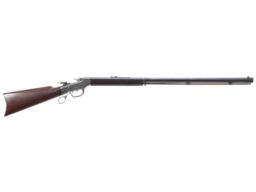 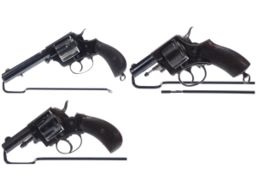 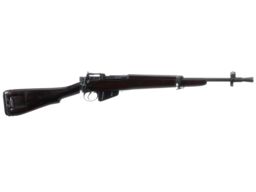 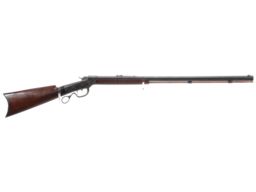 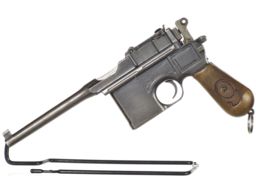