This is another fantastic example of an unbelievable, "One of Three" consecutively numbered British Holland & Holland "Royal Model" Express double rifles being offered for sale in this auction. This rifle is the "third" one in this set of "three" consecutively numbers rifles and is almost identical to the first and second rifles except for the caliber. This exceptional rifle is again a fabulous example of the true British "Master" Gun & Rifle Manufacturers art and skill as produced by Holland & Holland Ltd., of London England. This complete rifle set has also been documented through its own letter from Holland & Holland dated Jan 2014, that verifies the exact configuration of this rifle to include a listing of the various features along with a copy of the original H&H ledger order dated 1954. As previously stated, all three rifles were commissioned at the same time and by the same individual in 1954. This fabulous rifle features, exquisite full "hand cut" extremely fine English scroll engraving on 95% of the complete action and trigger guard, that includes having both side plates (locks/actions) also hand engraved in gold letters; "HOLLAND & HOLLAND" and the upper tang is also engraved in gold fill "SAFE". This fabulous rifle also includes a spare set, (left and right side) locks or actions that are also all hand engraved to match the originals and which are also already fully fitted to the rifle. These spare action locks and internal mechanisms are housed in two separate, small walnut storage cases, that are stored inside the larger rifle trunk case. The underside of the action is engraved "HOLLAND'S/SINGLE/TRIGGER" and "ROYAL/MODEL". The barrels are 24 1/2 inches long and are marked on top "HOLLAND & HOLLAND" on the right barrel and "98 NEW BOND STREET LONDON" on the left. The top of the center rib is marked "7 M/M "MAGNUM" FLANGED CARTRIDGE, which is basically a rimmed version of the 7 M/M belted magnum cartridge, and which ammunition is still readily available. The barrels are fitted with a raised ramp front sight base with a hooded ivory bead front sight and a 1/3 length, rear barrel rib that has been fitted with both a three leaf express rear sight, and a typical H&H claw mount type scope bases on the rear of the rib. The express sight has three folding leafs, that have been calibrated or graduated at 100, 200 and 300 meters. The scope mounts have a claw type base to the rear with the locking base/ring on the front. An original 1950s era Lyman Alaskan 2 1/2 power scope has been factory fitted/installed on these claw mounts and is included with this rifle. Both rings were hand fitted and soldered to the scope and the scope has been oriented in the rings to the left, so that the reticle forms a "X" with a dot center. The Lyman scope has the factory markings on the lower left side and the rear ring is hand engraved "HOLLAND & HOLLAND/No.35248". These Lyman Alaskan scopes were probably one of the best American made hunting scopes ever manufactured in the 1950s, small and compact; yet very durable and sturdy to withstand the heavy recoil from this cartridge. The rifle has been stocked in a beautiful set of dark hand select, extra fancy English walnut stock with a pistol grip and forearm. The underside of the pistol grip has a small steel pistol grip hinged pistol grip cap that holds a spare, (matching numbered) front sight. The stock and forend both feature beautiful hand cut, wrap around checkering. The rifle is also fitted with a set of sling swivel, one on the underside of the buttstock and the other on the under side of the barrels. There is a small brass identification plate on the underside of the buttstock that is engraved with a "K" and the stock is fitted with an old English type recoil pad. The water table is stamped with "35248/35248" and a "Crown/V" proof indicating both barrel were hand fitted to the action and the underside of the breech ends of both barrels are stamped with the British raised "scimitar/NP" for Nitro proofing followed by "COR. MKI 36-140MAX/Crown GP (for the London Proof House) 7mm 2.5". This beautiful rifle is accompanied by a full compliment of original Holland & Holland accessories all stored and housed in the original, 12 X 33 inch, H&H marked, leather covered, oak storage/traveling trunk that also has a heavy canvas outer cover. Inside the lid of the trunk, is the original H&H manufacturers label, along with the original H&H rifle registration label, which lists this rifle by serial number and the action caliber of this rifle; along with care and cleaning instructions for this fabulous set. The trunk itself has 10 compartments, that house the action and stock, the barrel set, the Lyman scope and leather carrying case, a small compartment for both walnut boxes that house the spare locks/actions, two compartments that house two sets of ebony handled H&H marked screwdrivers/action tools, one compartment for the silver bore cleaning funnel and leather rifle sling, and a separate compartment that holds "5" different, small square silver bottles, each containing a different type of fluid used to maintain this beautiful rifle. The lid of each bottle is engraved with the contents as follows "SOLVENT; LUBRICANT; PRESERVATIVE ; LEATHER and LINSEED". Length of pull: 14 inches, drop at comb: 1 1/2 inches, drop at heel: 2 1/2 inches, cast-off: 1/8 inches, weight: 8lbs 10oz.

Absolutely like brand new with 99% of the original blue finish overall with 99% of the original color casehardened finish on the metal parts with the various gold fill areas and markings completely intact. The stock and forend are both exactly the same as the metal with 99% of the original H&H wood finish with exceptional nice sharp and distinct checkering overall. The scope and rings also retain 99% of their original blue finish with clear sharp optics. The leather bound, oak trunk storage case is also in near excellent condition with some slight staining on the top of the outer canvas cover with minor wear on the leather bounds corners from handling and sliding around while being on display. The internal felt material and various accessories are all in like new condition. The rifle actually looks like it was commissioned in 1954, received and never fired! Unbelievable, outstanding old world British Craftsmanship from an exceptionally prestigious company. 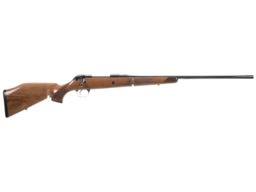 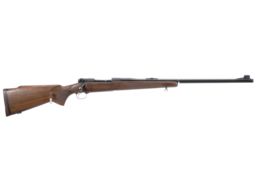 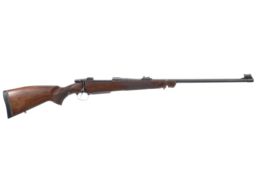 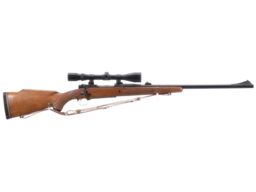 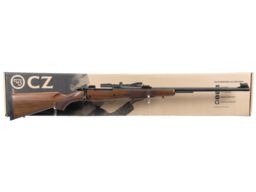 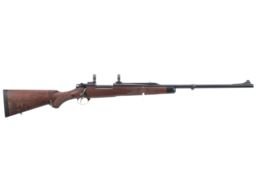