Historic London Armoury Kerr's Patent Percussion Single Action Revolver Presented to Given Campbell by Confederate President Jefferson Davis on May 4, 1865 During His Flight from Richmond with Civil War Diary and Documentation

Historic London Armoury Kerr's Patent Percussion Single Action Revolver Presented to Given Campbell by Confederate President Jefferson Davis on May 4, 1865 During His Flight from Richmond with Civil War Diary and Documentation

This is a scarce Kerr's patent percussion revolver made all the more rare by its provenance. The Confederacy imported about 7000 Kerr revolvers, but this particular revolver was not carried by a regular soldier; the revolver is said to have been given by Confederate States of America President Jefferson Davis to his personal escort and noted Confederate officer Captain Given Campbell during Davis' flight from Richmond. Prior to the war, Campbell was a lawyer in St. Louis, MO, but he joined the Confederate Army at the outbreak of the war. He was commissioned as a captain in Nathan Bedford Forrest's Cavalry and fought in multiple battles including Pea Ridge and Chickamauga and later served under Basil Duke. Following Lee's surrender, Campbell was selected by President Jefferson Davis to form a unit and lead Davis' escape. President Davis and his guards were later captured at Irwinsville, Georgia on May 10, 1865. In his included "Memorandum of a Journal Kept Daily During the Last March of Jefferson Davis," on May 4, 1865 Captain Given Campbell notes that Davis gave him funds to buy a horse and pistol for each man in the party and "…President Davis presented me with a pair of large revolvers, Kerr’s Patent; the escort was reported as ready for duty.” The left side of the frame is marked "LONDON/ARMOURY", the right side of the frame is engraved: "KERR'S PATENT 1041". The lock plate is marked "LONDON ARMOURY". The cylinder is also numbered "1041". The left barrel flat is stamped: "L.A.C." with British "crown/GP" and "crown/ V" proof and inspection marks. Similar proof and inspection marks are stamped between each chamber of the cylinder. The assembly number "758" is stamped on the front of the cylinder. There is a "JS/Anchor" mark on the grip just below the strap of the trigger guard. The mark is thought to be an export stamp designating that the pistol was exported to the Confederate States. After the Civil War, the revolver had "PRESENTED TO/GIVEN CAMPBELL/BY/JEFFERSON DAVIS/ PREST. C.S.A/ MAY 4/1865" engraved on the left side of the frame in front of the cylinder. It was passed on to Given Campbell, Jr. by his father. He later sold the weapon to Arthur Ziern Jr. in 1940 and the revolver remained in the Ziern family as is shown by the included letter of provenance from the Ziern-Hanon Galleries. The revolver has a high polish blue finish on the barrel and frame, and casehardened loading lever, trigger guard, side plate and hammer. The one-piece grip is finely checkered English walnut. The butt is fitted with a lanyard ring. Included with the weapon is a binder of research documents and primary source material relating to the weapon's history including: a notarized Ziern-Hanon Galleries Letter of Provenance that traces the revolver's heritage back to Jefferson Davis, a copy of COLONEL GIVEN CAMPBELL C.S.A. CONFEDERATE HERO," original letters and Civil War diaries, information from the Library of Congress, and copies of death certificates corroborating the information in the Ziern-Hanon letter.

The revolver is in very fine condition with clear markings, 70% of its original high polish blued finish, and an aged gray/brown patina on the exposed metal. The grips are fine with crisp checkering and some minor chips and scratches on the smooth, upper left section. The action functions single action only, needs work to make double action function. 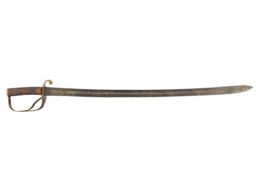 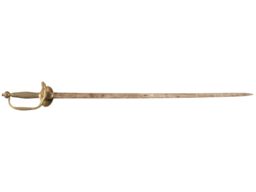 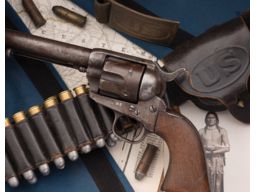 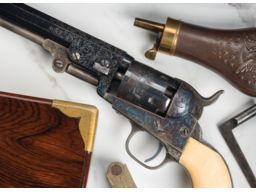 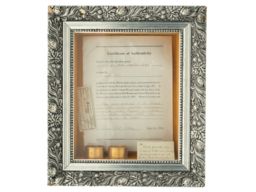 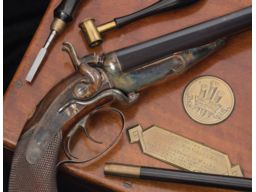