Developed in Paris and patented in the U.S. in 1862, Alphone Jarre's "breech-bar" system used a horizontal arrangement of pinfire chambers to supply repeating fire, which could be put to use on pistols, rifles, and even cannons. In operation, the bar is pre-loaded with 10 pinfire cartridges, all secured in place with a spring-retained bar, and is then advanced from chamber to chamber left to right by a push arm connected to the double action trigger. When positioned for discharge, the bar sticks up to 3 1/4 inches out of the side of the pistol. Jarre, knowing that is far too cumbersome for a defensive pistol, integrated an ingenious "carry mode": a sliding hinge that allows the barrel group to fold sideways and be repositioned in front of the frame, reducing the width to well under an inch, good even by modern concealed carry standards, with the barrels able to be placed in firing position at a moments notice. The bar and frame both bear the patent mark "A. JARRE/Bte S.G.D.G." with "8" on the bottom of the barrel group and "PC" on the front of the action. A sighting post is installed on the front of the frame. An ejector rod is screwed into the top of the grip section, and the grips are checkered birds head ebony. Jarre's work in the harmonica gun field, and this pistol in particular, were featured in an article by Charles Grimes in the August 2005 (Volume 51, Number 3) of The Gun Report (photocopy of article provided with gun).

Fine with a crisp mixed brown and gray patina on the surface, traces of dark original blue in the protected areas, minor denting on top of the bar from hammer strikes and a few minor handling marks overall. The grips are very fine with some light dings and fine checkering. Mechanically excellent. 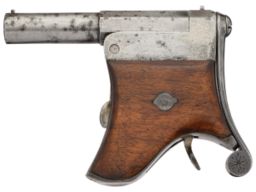 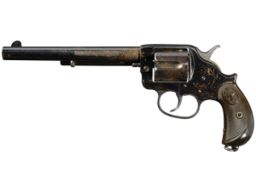 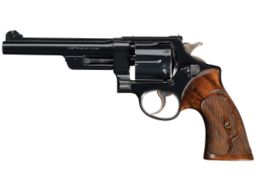 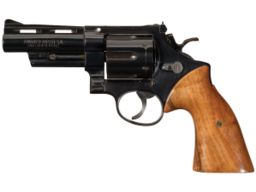 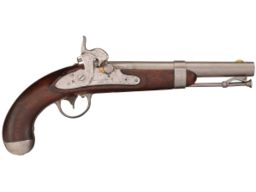