This is a solid representative example of an extremely rare early prototype Austro-Hungarian "Krnka" double action semi-automatic pistol. These pistols were developed by Karel Krnka a Czechoslovakian engineer and promoted/sold by the Roth company in the late 1800s. There are only a handful of these exceptionally rare pistols known in the world with this one, number "7" probably one of the earliest known examples. It had some very unique features for the late 1800s, such as; an internal magazine located inside the grip, that loaded from the top via stripper clips, has both a double and single action mode of firing with an exposed hammer and it has a sliding barrel with a rotating bolt with front locking lugs. While this last feature seems common today, very few pistols have ever used this feature with most of its application being used on semi-automatic rifles. Each one of these rare pistols, has some slightly different features as they were constantly being improved/modified as they were being built, on a prototype basis. They have a 6 inch rotating barrel and bolt assembly inside the upper portion of the frame.

Very good as period refurbished, with the flat and edges still correct looking with no heavy buffing or over polishing of the metal surfaces. The blue has now aged/thinned overall and it is showing wear on all the exposed metal surfaces with a very fine pitting underneath the thin blue finish. The left grip is in fine condition with both sides showing nice original checkering with light wear and handling marks with the top portion of the right grip having broken off. A very rare early, semi-automatic test pistol serial number "7". A truly unique specimen and the only example we can recall ever offering at our auction! 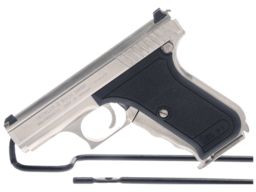 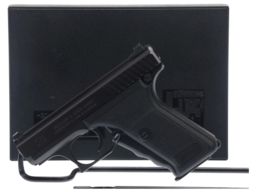 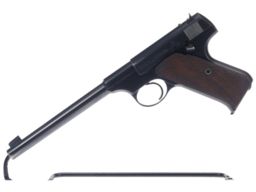 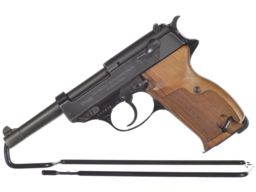 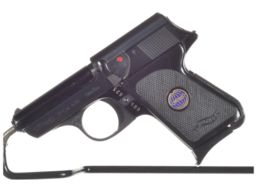 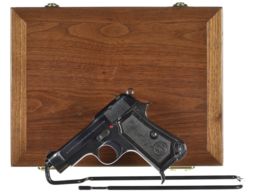