An outgrowth and evolution of the "Howdah" pistols used as point defense weapons by big game hunters, Charles Lancaster's multi-barreled pistols used a pepperbox-style action in conjunction with large, man-stopping brass cased cartridges to deliver a rate of fire and striking power that was among the best available in its day. Though never a standard issue weapon with the British colonial forces, many officers chose Lancasters over the standard issue revolvers due to these attributes. Silver blade and notch sights, with "CHARLES LANCASTER (PATENT) 151, NEW BOND ST. LOUIS" marked on top of the upper barrel. Various proofs are stamped on the smooth bore barrels, "577 CF" marked on the left flute, and two "crown/V" proofs on the left side of the frame. The barrel latch is a visible hook on either side of the frame, controlled by a right handed thumb lever, and an ejector is automatically engaged by tipping the barrel, using a cam system similar to the one found on the later Webley revolvers. Fitted with checkered grips and a lanyard ring on the butt. The case has a Lancaster paper label on the inside of the lid and an inscribed brass inlay on top of the lid. The inlay is inscribed "CAPT. J. STRAKER 3RD REG'T. W.Y.R. HRHPOWOR." "W.Y.R. HRHPOWOR" is the abbreviation for West Yorkshire Regiment (The Prince of Wales Own). According to The Army List of May 1899 by Great Britain Ministry of Defense, Captain J. Straker served with 3rd Battalion, the West Yorkshire Regiment (The Prince of Wales Own) in the Mediterranean. The 3rd Battalion, the West Yorkshire Regiment received the Mediterranean 1901-02 battle honor for service during the Second Boer War of 1899-1902, while performing garrison duty in the Mediterranean to relieve regular Army battalions for active service. With the case are the following accessories: oiler, screwdriver, cleaning rod, two cartridges and two West Yorkshire insignia.

Very fine. The pistol retains 60% original blue finish with a smooth brown patina on the balance. There are a couple of very small patches of minor pitting limited to the ejector housing. The grips are fine with a wood filled repair on the left panel, some minor handling marks and some scattered blemishes in the overall crisp checkering. Mechanically excellent. The case is fine with some minor handling/storage marked and some high spot wear on the lining. A very impressive large frame .577 Howdah Pistol! 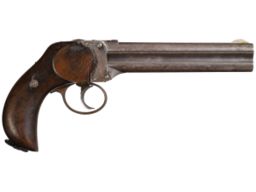 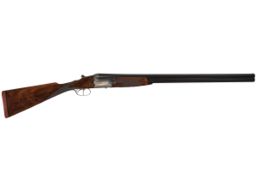 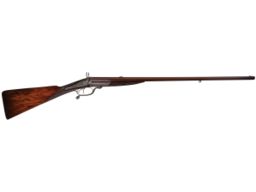 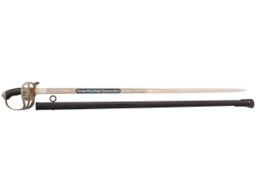 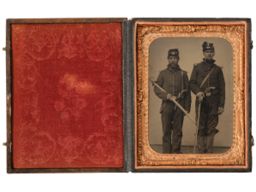 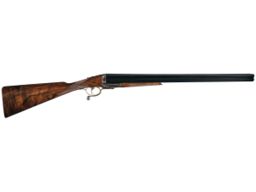