Produced at an unknown date, this rifle is effectively a pair of barreled receivers sharing space in a single stock, creating a unique double bolt action over and under weapon. The core of the rifle is a Mauser 98k-style receiver upgraded by the firm of Christoph Funk of Suhl, which has passed through proof houses in Germany and London, with a ramp blade front and dual-leaf rear sights on the Krupp steel barrel, a band of light engraving at the breech, a Zeiss scope installed on a double claw mount, elongated and turned bolt handle, conventional Mauser-style internal magazine and a single set trigger. Riding beneath the 7x57 barrel is a single shot 22 caliber rifle fed via a rotating and tilting breech assembly, German proofed, marked "K.EVERSULL" and set into the forearm with a single trigger installed behind the 7x57 trigger and a cocking mechanism on the top left of the wrist. The combination is at once mechanically novel while also featuring a barrel profile and functionality reminiscent of a traditional German multi-caliber hunting arm; such arms, such as the more famous drilling and vierling breechloaders, developed as a result of overlapping seasons of game. This combination would give the hunter enough firepower to deal with stag or boar while also having a way to dispose of smaller animals without the blast, recoil, or expense of using an overpowered round. Fitted with a fine checkered walnut stock with sling swivels, a horn grip cap, and a checkered horn buttplate extension. Included with the rifle is a partial replacement breech assembly, which also bears German proofs.

Very fine with 95% plus blue finish showing some light handling marks and edge wear. The reoiled wood is fine with a few mended cracks on the forearm ahead of the 22 breech assembly and some scattered dents and scratches. The buttplate extension has been pinned directly to the current buttplate. Optics are clear with some minor wear and spotting on the tube. Both receivers are in fine working order. A physically attractive and mechanically intriguing superposed barrel bolt action sporting rifle. 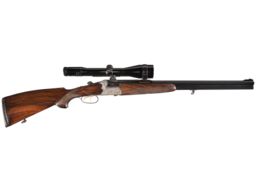 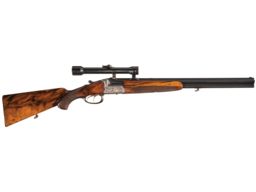 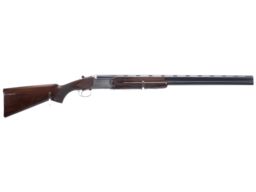 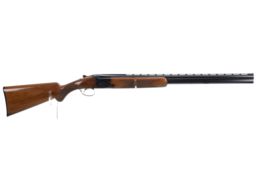 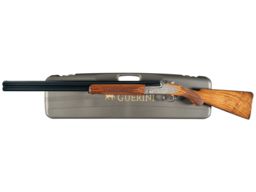 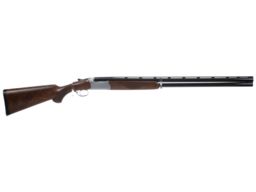