This is an excellent example of a super rare very early 1923 Dutch Naval contract Luger as produced by DWM. These early Dutch Lugers are extremely rare in their own right as most were sent to the Dutch East Indies, with all seeing heavy use in the tropics or were captured by the Japanese at the start of WWII, with most never returned. The navy marked versions are even more rare and very seldom encountered. On this example the front grip strap is correctly inscribed "K.M" for "Koninklijke Marine", or the Royal Netherlands Navy. This is not the same as the later Dutch Banner Lugers made in the late 1930s or those produced by Vickers Ltd. This example is the first contract version which has a blank chamber area with the "DWM" markings on the first toggle. It has the standard "GELADEN" markings on both sides of the extractor with the "RUST" markings on the safety area. The left side of the barrel extension, the underside of the barrel and the left side of the breech block are all marked with a single early "Crown/U" DWM/Mauser acceptance or firing proof. This pistol is fitted with a set of standard walnut grips and a unmarked nickel plate magazine that has a unmarked wooden base. This pistol is complete with an original early Netherlands/Dutch Navy contract leather holster. These holsters are almost identical to the 1933 German military pattern in that they have a single magazine pouch on the side with a take-down tool pouch that has an elongated flap that holds both the tool and a small cleaning rod inside the flap of the holster. This holster is unmarked, which is correct as it would have been an early commercial version that was originally a light brown color that was dyed dark brown during its service use.

Very fine with 70% of the slightly thin original blue finish overall with wear and finish loss on the edges, high spots, grip straps, side plate and center section of the barrel. The grips are very good overall with nice distinct checkering that now have a light coat of varnish applied to them. The holster is excellent with nice tight stitching overall with some minor finish scuffing and loss of some of the brown color on the flap. However, that doesn't diminish the scarcity or rarity of this Luger rig. Probably the only 1923 DWM Dutch navy contract Luger you will ever see! 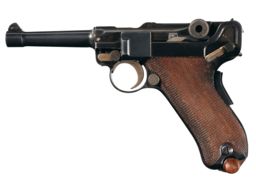 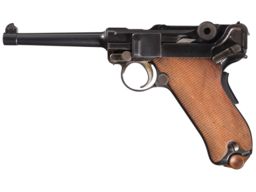 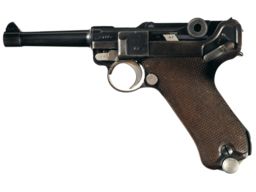 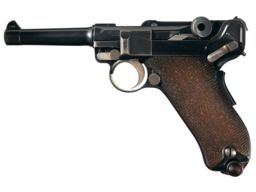 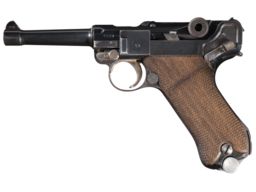 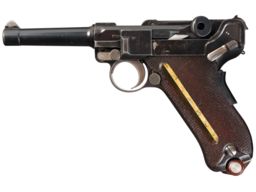