This is an exceptionally rare and probably "One of a Kind" late WWII Walther Model KPK prototype pistol. A similar example is found in the books: "Walther Engraved, Presentation and Standard Models" Vol II, 110-111; and again on page 130 of Volume III. Production of these pistols was probably in the 1940-42 time frame and it is estimated that several are in only the most advanced collections. This ultra-rare pistol was manufactured with a duraluminum frame so that it is very light weight with a standard steel slide. Some of the interesting features are Walther eliminated the traditional safety/decocker lever on the slide so that it has a very slim/narrow profile making it easy to conceal in your pocket, while still retaining the tried and true Walther PPK frame design along with the side mounted magazine release button. The pistol functions in both the single and double action mode. Although this pistol looks like a hammerless design, in actuality the slide has been lengthened approximately 3/8 of an inch to conceal the hammer, making this a very simple engineering design change which could have been easily incorporated into production had the war not ended. As noted this super rare pistol was a true prototype pistol that carries no serial number, and is marked on the left side of the slide with only: "Walther" inside a banner and "KPK" markings. The chamber area of the frame has a single "Eagle/N" Nazi Commercial proof mark with no other proofs or markings anywhere. The magazine is a standard all blued version marked with "WALTHER" inside a banner over "PPK 7,65mm" on the lower left side. The slide and barrel are still in their original Walther factory "in the white" finish with duraluminum frame also still in its original non-anodized "in the white" finish. The various small parts have their traditional all blue finish, indicating those were just pulled from regular commercial production. This is probably one of the rarest if not the rarest original World War II Nazi small caliber pistol in existence.

Excellent in as new condition as noted above with all the major components still in their original Walther factory in the white finish. The various small parts retain 99% of their blued finish overall. The grips are also in excellent condition with nice original, distinct markings and checkering on both sides. This is an extremely rare and probably a one of a kind Prototype Walther KPK pistol certainly for the super advanced, discriminating Walther PP or PPK collector. 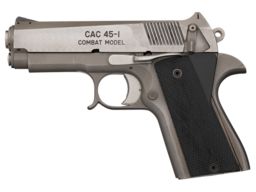 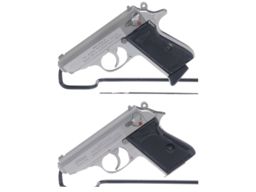 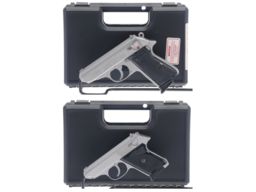 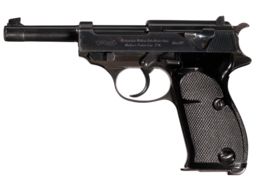