Very fine. The revolver retains 60% plus of the original blue finish with the finish thinning to a brown patina in some areas. There are some scattered small nicks and scratches. Nearly all of the nickel plating remains. The grip is very good with some small dings/chips and crisp checkering. Mechanically fine with clear, white filled markings. The case is good with storage wear and part of the lock mechanism absent along with some stains and tears on the interior.

This Webley style revolver is based on the famed Royal Irish Constabulary revolver pattern first introduced in 1867. This example is marked "Silver & Fletcher Patent 'THE EXPERT.'" on the top of the barrel and "S.W. SILVER & Co/ CORNHILL LONDON" on the top of the frame. The later are retailer/outfitter marks, and the gun was likely produced by Webley or a licensed firm. It is equipped with a Silver & Fletcher patent extractor that pulls out of the cylinder pin and pivots to the left to push out empty cases and a hammer safety marked "PATENT" on the left that prevents the firing pin from striking the primer by a rotating knob. The left side of the frame is marked "450" just below the top strap at the front and with the serial number just above the trigger guard. "285" is marked on the right side opposite of the "450" mark. The front of the frame has a "1" and "2". The rear of the cylinder is marked "219" and "2" while the front face is marked "16". It is fitted with a checkered one-piece grip and lanyard loop. The rare hammer safety mechanism is seen on similar Webley R.I.C. No. 1 New Models and a Webley No. 5 on page 69 and 96 of WEBLEY REVOLVERS by Bruce and Reinhart. The revolver comes in a wood case with a velvet lined and partitioned interior that includes a block for thirty-two cartridges and currently holds eight rounds of .450 ammunition (5 Eley Bros., two Kynoch, and one unmarked). It has a nickel plated cylinder pin, extractor, loading gate, hammer/safety and trigger with the remained blued. 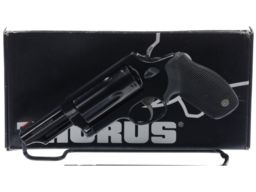 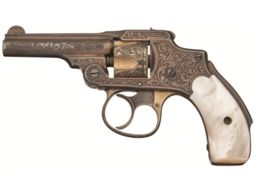 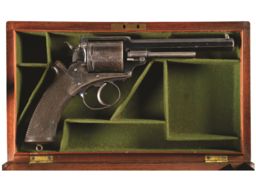 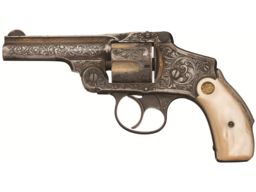 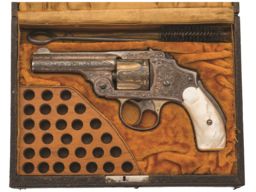 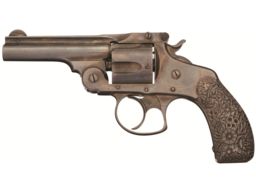