This is a very rare example of a North American Arms Company Limited of Quebec Canada, Model 1911 semi-automatic production pistol. In early 1918, the U.S. Government issued a contract for 500,000 Model 1911 pistols to the North American Arms Co., of Quebec Canada. Having no actual facility to produce these weapons, the North American Arms Company leased the Ross Rifle plant to actually do the manufacturing and as part of the contractual arrangement with the US Government supplying all the raw materials. Due to the shortages of raw material or forgings, they were only able to supply enough material to produce approximately 100 sets of parts. However due to the ending of World War I, the contract was terminated in December of 1918 with no M1911 pistols ever completed or officially accepted by the U.S. Government. However under the terms of the contract termination settlement, the U.S. Ordnance board did salvage or accept/reclaim a large lot of pistol parts and assemblies; all of which were later disposed of in which some of them were later assembled into completed pistols. According to a January 2002 article in "The Gun Report", Scott Meadows indicated that there were approximately 16 examples known to exist. This specific pistol is marked on the slide "MANUFACTURED BY/NORTH AMERICAN ARMS CO. LIMITED/QUEBEC CANADA" along with control number "77" on the upper left rear end of the slide, the trigger, and the lower left rear corner of the frame under the grip. The configuration of the parts and components were the same as the standard Colt Model 1911 models. The hammer is a wide spur version similar to the Colt production models except it is without any checkering on the spur. The grip panels are the standard checkered walnut versions. The magazine is a blued Colt manufactured two tone pattern. This very rare pistol is complete with a unique all leather holster that is very similar to the Model 1909 Mills woven holster. This example has the original brass cup on the end of the holster that is marked "MILLS" inside a outline of a cartridge. Accompanied by an authentication letter by noted 1911 expert Mr. Scott Gahimer.

Fine with 40% of the original blue finish remaining, with most of the blue in the protected areas and on top of the very rear of the slide. The markings are clear and sharp with some minor light dings in the metal in the front grip strap. The walnut grips are in fine plus condition with nice original visible checkering on both sides, with heavier pressure dents on the lower left sides, just showing even honest wear overall. A very rare late WWI Contract North American Arms Co Model 1911 semi-automatic pistol. This is a rare opportunity to obtain the rarest Model 1911 pistol variation! 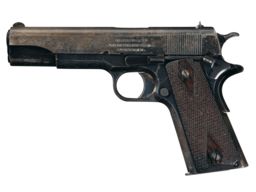 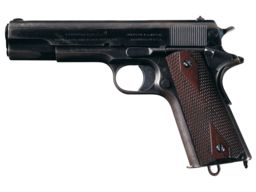 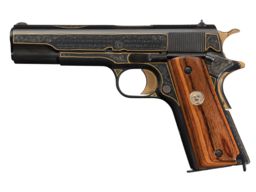 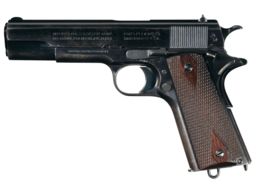 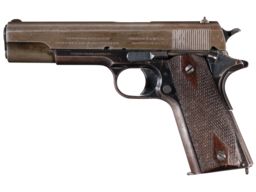 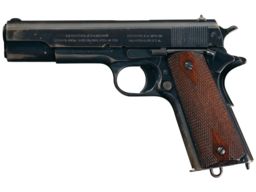