This is an outstanding example of a late production U.S. Colt Model 1903 General Officer's pistol rig as produced in mid 1943 that comes with complete documentation as being issued to BG Kelleher. This complete and authentic General Officer's pistol rig includes the original General Officer's black leather holster, black leather belt with Brass General Officer's buckle and a Bauer Bros marked, double magazine pouch. Included with this pistol is a letter from the Springfield Research Service verifying this pistol was issued to B.G. Kelleher on Jan 18, 1956. These were the standard U.S. General Officer's pistols as issued from 1942 until 1975, when the supplies ran out and Rock Island Arsenal started producing the M15 GO pistol. General Kelleher lead a very distinguished military career that started in Nov 1942, where as a 1st Lieutenant in the 26th infantry Regiment, of the 1st Infantry Division, (the Big Red 1), he participated in the U.S. landing in North Africa. In this campaign he served as a platoon leader, later being promoted to a Company Commander, and Battalion XO. He was later given a battlefield command to Lt. Col. He was twice captured by Rommel's Africa Corps., and escaped both times. In 1944-1945 he served in Europe as the Battalion and Regimental Commanders of the 104th Infantry Division (the Timberwolfs). This Infantry Division was activated in 1921, and was created with a focus on nighttime combat operations. They were deployed during WWII, and saw almost 200 days of actual combat fighting in northwestern Europe as it fought through France, Belgium, and into western Germany, as it advanced through the European theater late 1944 and 1945. After WWII headed one of the security detail that guarded prisoners at the Neurenburg trials. After WWII, at the outbreak of Korea he was ordered to command the 35th Infantry Regiment of the 25th Infantry Division Korea. In 1956 he was promoted to BG in Feb 1956 and assumed the position of the Chief Army Section Military Assistance Advisory Group, Japan and in June 1957 he was assigned as the Division Commander of the 101st Airborne Division (Screaming Eagles). In Dec 1957 he was assigned as the Deputy Commanding General of Ft Leonard Wood MO. A short listing of his awards are: Distinguished Service Cross with Oak Leaf Cluster, Silver Star with 4 Oak Leaf clusters, Legion of Merit and Bronze Star with V, Purple heart and twice awarded the Combat Infantry Badge (CIB). He also received the French Croixz de Guerre, DSC (Great Britain's 2nd highest award) Russian Order of Suvorou. The pistol has the standard Colt two-line address and patent dates on the left side of the slide, with the caliber marking and "U.S. PROPERTY" roll stamped on the right side of the frame. The left side of the trigger guard is marked with the Colt "VP" verified proof and 44 on the right sides. It is fitted with checkered grips with Colt silver medallions on each side and comes with one all blued Colt magazine marked on the base: "COLT 32 AUTO".

Excellent with 99% of the original parkerized finish overall with only minor edge and high spot wear. The walnut grips are also in excellent condition with nice distinct checkering with some minor light pressure dents on the sides in a couple of places from being in the holster. Mechanically excellent. The GO belt, holster and magazine pouch are all in excellent condition with 99% of the black finish on the leather showing only minor use. A really nice super high condition GO pistol rig that is complete, that was issued to a true WWII/Korea hero. 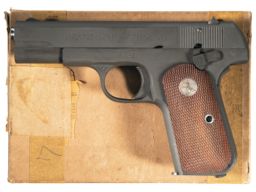 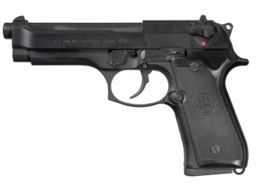 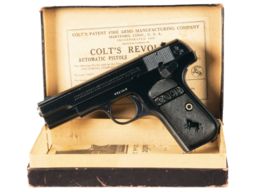 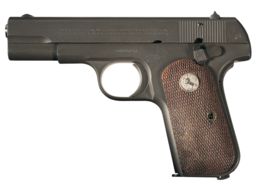 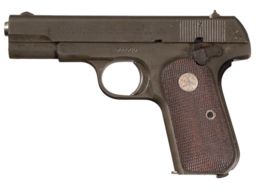 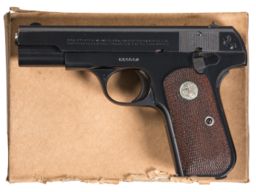