This large caliber revolver which is reportedly nicknamed the Man-Stopper is pictured on page 240 of Black, Guerin, and Michaud's TRANTER CARTRIDGE FIREARMS. In that section, the authors discuss the debate of whether the Tranter revolvers are or are not Webley products. The authors firmly argue that they are designed by William Tranter as is demonstrated by the clear "Tranter Patent" markings on most examples including this one. However, they also explain that Tipping & Lawden along with Webley were licensed by Tranter to produce .577 of their own patterns. The authors identified this example as one produced by Braendlin's factory based on the "cross pennant/B" stamp on the left side of the frame. The top of the frame has the retailer marking "ADAMS & Co/9 FINSBURY PLACE SOUTH/LONDON" and the back of the recoil shield has the Braendlin's improvement and Tranter's patent markings. The retailer address places the date of manufacture in the 1870s to 1880 as Adams relocated to 32 Finsbury Pavement in 1881. The bottom of the barrel is marked "2" and "1773" (possibly serial or assembly numbers). The revolver has some light border engraving, scroll work on the top strap and cylinder pin along with some light designs on and around the screws. Small British proofs are seen on the cylinder. It is fitted with a checkered one-piece grip and lanyard ring. It has small bead front and notch rear sights. The revolver comes with a contemporary case with "PHILIP WEBLEY AND SON." label on the inside of the lid, burgundy fabric lining, and fitted interior with a cartridge block for twelve rounds holding two cartridges and six cases, a tin of Webley cleaning grease, key, and patches.

Fine. The revolver retains 50% of the original blue finish with a brown patina and bright surfaces on the balance. There are minor scratches throughout especially on the cylinder. The grips are also fine with sharp checkering. Mechanically fine with clear markings. The reproduction case is in very good condition with some slight storage marks on the exterior and only a few loose threads on the interior. 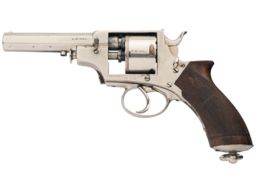 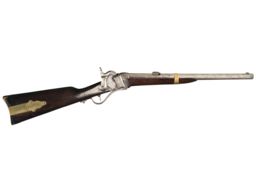 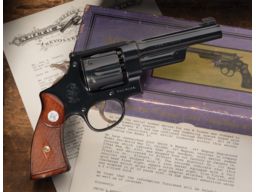 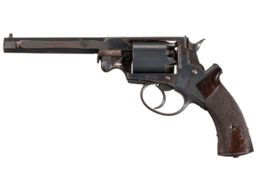 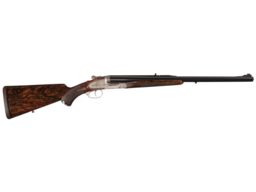 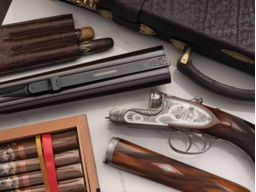