Second Model LeMat with distinctive nine shot .42 caliber cylinder and smoothbore, 16 gauge, "grapeshot" barrel. The revolver has the Second Model features which include: (1) round trigger guard, (2) integral lanyard ring on the butt, (3) octagon barrel, (4) loading lever on the left side of the barrel and (5) pull-out assembly latch. The revolver has small British Birmingham proofmarks stamped on the right side of the octagon barrel, the bottom of the "grapeshot" barrel, on each cylinder chamber and on the right side of the frame. The top of the barrel has no maker's marking. This appears to be an English made LeMat revolver completed by an English gunmaker utilizing LeMat components left over from Confederate pistol contracts terminated at the end of the Civil War. The revolver appears to be in all respects a English, Second Model, LeMat revolver without barrel markings and serial numbers. The revolver has a high polish blue finish on the frame, barrels, cylinder and trigger guard. The hammer with the distinctive pivoting firing pin and knurled spur is color casehardened. The two-piece grips are European walnut with deeply cut checkering. Invented by Dr. Jean Francois LeMat of New Orleans and patented in 1856. LeMat revolvers were subsequently manufactured in Paris, Liege, London and Birmingham. The LeMat revolver was purchased in limited numbers by the Confederate States of America during the Civil War. The nine shot cylinder, 18 gauge "grapeshot" barrel and association with Confederate cavalryman General J.E.B. Stuart combined to make the LeMat revolver one of the most widely recognized and desirable Civil War handguns.

Extremely fine. The revolver is all original and retains at least 70% of the bright original high polish blue finish. Most of the blue finish is present on the barrels and frame. The cylinder has a dove gray patina with traces of blue in protected areas. There is no flash pitting on the percussion nipples, front or rear face of the cylinder or hammer. There are several patches of surface rust and some age discoloration on one cylinder chamber and on the adjacent portion of the left side of the frame. The loading lever appears to have been bright finished but has aged to a mottled silver-gray patina. The grips are in excellent condition with sharp checkering. The action is tight and functions perfectly. LeMat revolvers rarely retain any original finish. This is a great looking example of a LeMat revolver that retains most of the original finish and shows mainly storage wear. 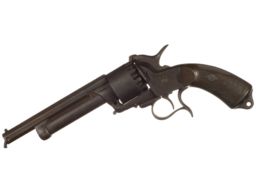 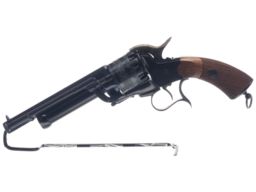 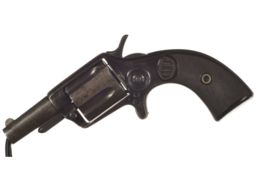 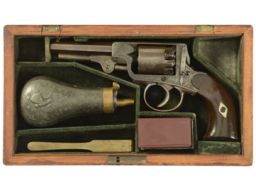 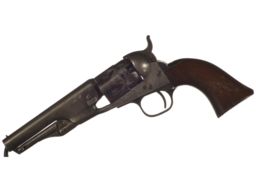