This is a fine example of a very rare Gustloff-Werke experimental semi-automatic pistol. The development of this pistol design started circa 1938/39 under the direction of Fritz Sauckel Gauleiter of Thuringia and was manufactured by the Gustloff-Werke. The pistol was a simple blow-back design that had a duraluminum frame (similar to the Sauer Mod. 38 pistol) with a steel slide similar in shape to the Walther PP models, with a single action internal hammer design. It is reported that in January 1940 a prototype was submitted to Adolf Hitler with the suggestion that it be adopted for use by the various police agencies and that production could be accomplished at the old Weimar factory using slave labor from the nearby Buchenwald concentration camp. However, due to the outbreak of WWII and large numbers of both Walther PP and PPKs pistol already in use throughout the German military, no order ever materialized. Consequently no production progressed beyond the early developmental stages with approximately 100 total manufactured. This specific pistol is serial numbered "13" on the butt of the grip, and the base plate of the magazines. The top of the slide has a raised serrated sight rib with a blade front sight and drift adjustable rear sight, with shallow grip serrations on both sides of the slide. There is a small sliding safety on the left side of the frame with the frame mounted push button magazine release. The pistol has a flared front grip strap and corresponding magazine floor plate. This pistol being so early, has no factory markings other than the serial number and the chamber being stamped "Kal.7.65 mm". It is fitted with a set of molded brown bakelite checkered grips with the left grip having a large circled letter "G" molded into it. It is complete with the one numbered and matching magazine. The pistol is still in the white from the factory with the slide never having been blued, and the duraluminum frame never been final finished.

Very fine still in its original factory "in the white" unfinished metal surfaces. The grips are fine with nice distinct checkering and a clear sharp "G" factory mark. Mechanically fine. A very nice example of a rare Gustloff-Werkes pistol. 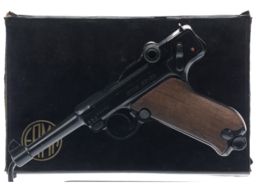 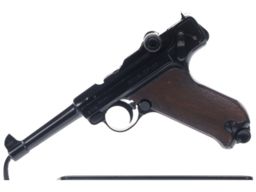 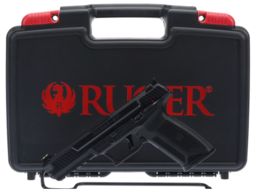 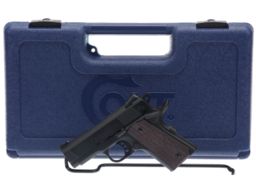 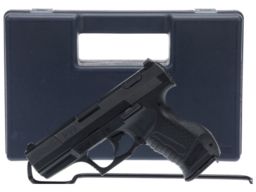 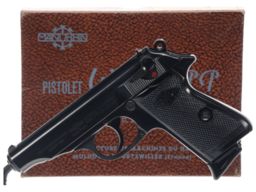