This is an excellent example of a late 1950s production, experimental M1 Garand rifle chambered in the experimental Duplex cartridge of "22-06". After WWII the U.S. Army developed a series of experimental cartridges that were intended to improve the hit probability by using hyper-velocity and multiple projectile cartridges, based on the 30-06 cartridge. The test rifles used at that time were all the standard service rifle of the day the M1 Garand. This excellent rifle is one of those test rifles intended to use/fire a "duplex" cartridge. The duplex 22-06 cartridge itself is actually a 30-06 case necked down to 22 caliber that had an elongated neck which held two 50 grains bullets (stacked on top of each other). The intent being that with a multiple cartridge you would increase your hit probability just like firing a salvo cartridge. The rifle itself was manufactured by Springfield Armory in 1957 and it has the original and correct all corresponding parts. The barrel as noted is in 22 caliber and it is marked on the side: "SA 3799 6 57 8142 4238 RP CAL 22 DUPLEX". The bolt is marked SA 65282871-SA/YO1 and the operating rod is marked 6535382 SA. The complete trigger group is all correct late post war SA production that is correctly marked. It is fitted with the standard gas cylinder with a high hump gas cylinder lock and a four-slot gas plug marked "BS". It is fitted with a standard front and rear sight set. It is fitted with a standard walnut stock and hand guard set. The stock has the DOD cartouche on the left side with a single circled "P" proof in the pistol grip area. The stock has two strips of red tape, one on the buttstock and one on the underside of the forend, both probably intending to alert the user that it is chambered for a non-standard cartridge.

Excellent plus with 99% plus of the original Springfield armory parkerized finish overall with a hint of finish loss on the receiver rail from hand cycling the action. The stock and handguard set are all in excellent condition with clear sharp cartouches with only very minor handling marks on the left rear side of the buttstock. Mechanically excellent. 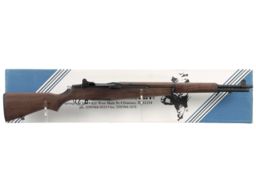 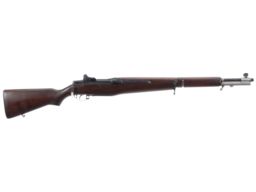 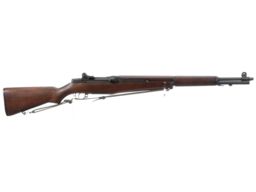 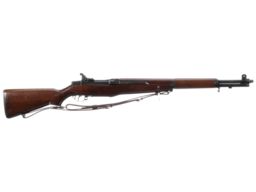 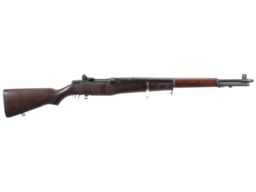 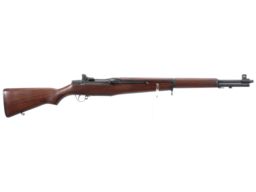