Very fine. The rifle retains 85% of the slightly faded original military blue finish. Wear is limited to a few minor handling marks and thinning on the top of the bolt, bottom of the magazine and edges of the buttplate. The bore is bright. The receiver markings are crisp. The stock is in very good overall condition with shallow scattered dents and handling marks. There is a repaired hair-line crack in the left side of the stock that runs from the lower barrel band thru the middle of the grasping groove. The edges of the grasping grooves show light handling wear. This is a solid representative example of a scarce and important Vickers Armstrong Pedersen Autoloading Rifle.

Caliber .276 semi-automatic rifle designed by John D. Pedersen and manufactured by Vickers-Armstrongs LTD. circa. 1930. The Pedersen Auto-Loading rifle was developed as the result of U.S. Army interest in adoption of a semi-automatic infantry rifle following WWI. In 1923 the Ordnance Department awarded successful small arms designer John D. Pedersen a contract to develop a semi-automatic rifle for the Army. Pedersen developed the .276 caliber self loading rifle. The Pederson .276 rifle was tested by the Ordnance Department and recommended for adoption in 1928. However, partly because of Army reluctance to replace the .30-06 cartridge with the .276 round the Ordnance Department conducted addition semi-automatic rifle tests. After additional testing in 1931, the Infantry Board recommended that the Army develop the T3 Garand semi-automatic rifle manufactured by Springfield Armory rather than the Pedersen rifle. Pedersen had previously contracted with the English firm, Vickers-Armstrongs LTD, to manufacture his rifle in 1930. Vickers-Armstrong manufactured an estimated total of 200 Pedersen Auto-Loading rifles. The Pedersen rifles tested by the Army in 1931 were manufactured by Vickers-Armstrongs. After the Army discontinued development of the Pedersen rifle, a limited number of rifles were sold to China and Portugal. This rifle is chambered for the .276 rimless cartridge and has the distinctive Pedersen Auto-Loading rifle features which include: (1) toggle action bolt, (2) box magazine loaded with 10-round en-bloc clips,(3) fine adjustable, 1/2-minute rear sight, (4) unique 24-inch barrel with spiral cooling fins, (5) perforated metal hand guard and (6) sliding bar safety in the bolt. The metal components have a dull military blue finish. The oil finished walnut stock has a pistol grip, grasping grooves on sides and round and oblong cooling holes on the bottom. The left side of the receiver is roll-stamped: "PEDERSEN AUTOLOADER PB/VICKERS-ARMSTRONGS.LTD" in two lines. The serial number, "6" is stamped on the right rear of the receiver. The top of the sliding bar safety is marked "REDY" on the left side and "SAFE" on the right side. An unidentified proof mark is stamped on the left side of the receiver. The Pedersen Autoloading Rifle was a high quality, well-finished, rifle with finely milled components. It was the primary competitor to the semi-automatic rifle developed by John C. Garand and is a key piece in the development of the U.S. semi-automatic rifle. This Pedersen Auto-Loading rifle would be an important addition to any advanced collection of U.S. military rifles. 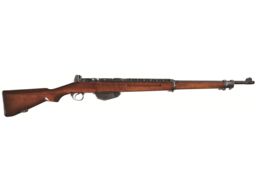 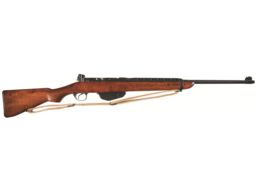 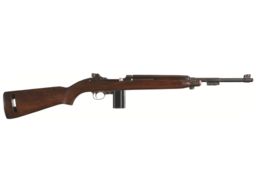 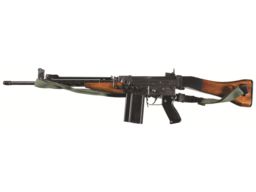 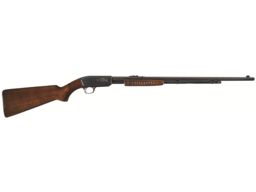 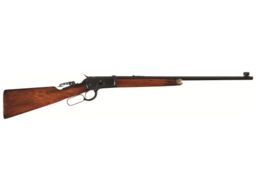