This is a highly desirable example of a "Berdan Sharp Shooter" issued Sharps Model 1859 breech loading rifle with factory double set triggers manufactured circa 1862. This rifle is one of the 2,000 special order Sharps Model 1859 rifles purchased by the Ordnance Department in April 1862 to arm the 1st and 2nd U.S. Sharpshooter Regiments ("Berdan's Sharpshooters"). The Sharps rifles ordered by Berdan to arm his regiments were equipped with factory installed double set triggers, angular socket bayonets with combination front sight/bayonet lug, and rear sights with 800 yard center notch. All of the Berdan Sharpshooters rifles had the Lawrence patent pellet primer and a stock with casehardened patch box. The 2,000 Model 1859 Sharps rifles purchased for issue to Berdan's Sharpshooters fall in the 54,000-57,000 serial number range (the lowest known Berdan Sharps serial number is 54374 and the highest serial number is 57567). Berdan's Sharps rifles had the standard finish with blue barrel and breechblock; casehardened barrel bands, receiver, hammer, lever, patch box and buttplate; and black walnut stock and forearm. The left barrel flat of this rifle is stamped with the small "T" sub-inspection mark of Ordnance Inspector John Taylor who inspected most of the Berdan's Model 1859 rifles. The left stock wrist has a faint Ordnance final inspection mark that consists of two script initials within an oval border. The mark appears to be the "J.T." final inspection mark of John Taylor. This "JT" final inspection mark is found on most Berdan's Sharps rifles with legible inspection marks and is a key identification point for a genuine Berdan Sharps rifle. The serial number "56181" is stamped on the upper receiver tang. The barrel, left and right sides of the receiver and lock plate have the standard Sharps and R.S. Lawrence patent markings. The rifle is complete with a leather sling with brass buckle and keeper stamped "D.M.G.G.F. 1955" on the inside . The 1st and 2nd U.S. Sharpshooter regiments were recruited from selected marksmen from Maine, Michigan, Minnesota, New Hampshire, New York, Vermont and Wisconsin by Colonel Hiram Berdan. Equipped and trained as skirmishers and issued dark green uniforms with black buttons similar to those worn by the famous British rifle regiments during the Napoleonic Wars, Berdan's Sharpshooters formed an elite corps in the Army of the Potomac. Berdan's Sharpshooters were first engaged in the Peninsula Campaign in April 1862 and subsequently fought in nearly every engagement of the Army of the Potomac until they were disbanded in February 1865. Berdan's Sharpshooters claimed to have inflicted more Confederate casualties than any other regiments in the Federal Army. A number of Sharps New Model 1859 double set trigger rifles purchased for the Berdan's Sharpshooters were issued to the Pennsylvania Bucktails and 1st Minnesota Volunteer Infantry. Both of these regiments had distinguished Civil War combat records. Sharps Model 1859 rifles in the 53000-57000 serial range with factory double set triggers and "T" or "OWA" sub-inspection marks are VERY scarce and historic firearms. Experts have identified fewer than 50 Sharps Model 1859 rifles with all of the Berdan Sharpshooter features.

Very good plus, well above other known examples! The rifle is a complete original example of the 2,000 New Model 1859 Sharps rifles with double set triggers purchased for Berdan's Sharpshooters in April 1862. The triggers are original to the rifle, and the "T" and "JT" inspection marks are correct for a Berdan's Sharps rifle. The barrel has traces of blue with the balance a smooth brown patina with clear markings and crisp "T" Ordnance sub-inspection mark. The case colors on the receiver, hammer, patch box and other casehardened components have faded to a mottled gray brown patina. The receiver and lock plate markings are sharp. The Lawrence pellet primer retains all of the original components. The set triggers function well. The stock and forearm are both very good with sharp cartouche. The balance of the stock and forearm have scattered handling and storage marks. This is both an attractive and solid representative example of a scarce and historic Berdan Sharpshooters Sharps New Model 1859 rifle. 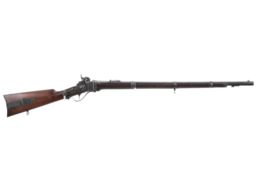 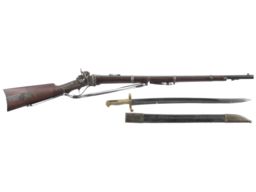 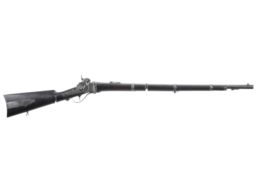 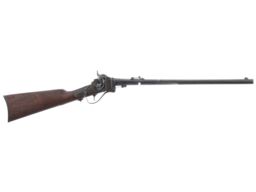 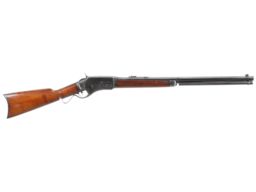 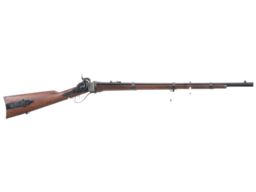