This Plant's patent revolver was manufactured circa the mid-1860s and has "MERWIN & BRAY NEW YORK" on the rib and the 1859 and 1863 patent dates on the cylinder. The serial number is marked on the butt and the underside of the smooth rosewood grips. The barrel and cylinder are blued while the frame is nickel plated. It is equipped with a German silver blade front sight and integral rear sight groove in the top of the frame. The hardwood case lid is professionally lettered in bold golden text "Steam Yacht/Halcyon/-of-/New York". The consignor notes indicate that the "20-" price mark on the lid was added by Bannerman's prior to sale in the 1930s-40s. The interior of the case is lined in blue velvet and has four smaller compartments in addition to the main section for the gun. Inside is an antique compass and the key. The included article copy from the New York Times on July 2, 1902, details an incident in which the Halycon "Broke Her Shaft in the Sound, with Her Owner, Frederick F. Ames, on Board. The article also discusses the history of the ship: " The Halcyon, which flies the flag of the Atlantic Yacht Club, is on of the oldest steam yachts in these waters having been launched from the yards of James Lennox in South Brooklyn, in 1875, her first name being the Lookout. Later she did service as the United States Fish Commission steamer Alcyon [sic] and then rejoined the pleasure fleet." It then lists the dimensions of the vessel.

Extremely fine. The barrel and cylinder retain 80% plus of the bright original blue finish with gray-brown patina confined primarily to the right side of the barrel. The frame retains 95% plus of the original silver plating which has taken on a slightly creamy appearance. The grips are very good with only some small dings and slight edge wear. The case is very good with some minor staining and slight tears on the interior, a hairline crack near the "20-" on the lid, and light handling and storage wear. A gem-specimen in an exquisite factory case! 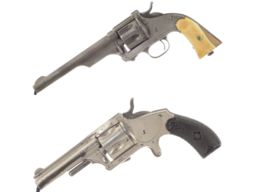 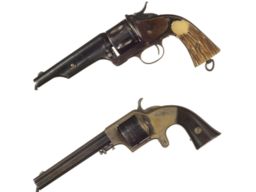 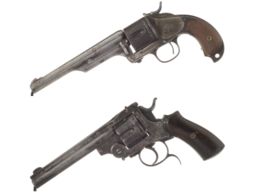 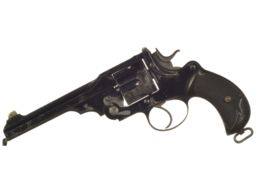 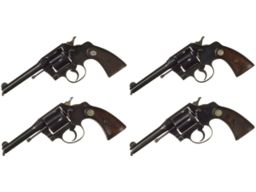 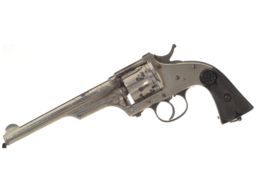