John Armstrong of Emmittsburg, Maryland, and Bedford County, Pennsylvania, worked as a gunsmith starting in 1808 and was active until 1822 or as late as 1841. His rifles are noted for their high quality and pierced brass patch boxes. Armstrong is known to have used many of his design aspects consistently which allowed him to produce more rifles than many of his contemporaries, while still maintaining quality. On page 447 of long rifle expert Joe Kindig, Jr.'s "Thoughts on the Kentucky Rifle in Its Golden Age" it states: "John Armstrong's workmanship is magnificent, and his designs are just about perfection. I cannot overemphasize the beauty of his rifles." This example has designs similar to those pictured in the above work along with the rifle pictured in "The Kentucky Rifle" by Merrill Lindsay. The rifle has a large brass forend cap, standard blade, and notch sights commonly seen on long rifles (rear sight set forward further than average), with "J. Armstrong" in script on the barrel and the lock plate, and a full length curly maple stock with silver thumb plate and eagle engraved cheekpiece inlay, and brass remaining furniture, including the long forend cap regularly seen on Armstrong's rifles, ornate patch box with spring door and engraved designs, and a long one-piece combination trigger guard and ramrod entry pipe. The wooden ramrod has a brass tip. The stock also has raised relief carving including wavy lines ahead of the flats and rococo scrollwork on the left side behind and below the cheekpiece. Armstrong long rifles are among the most desirable of all early American rifles. His work is among the best and helped lay the foundation for the Bedford County School which is known for balanced and exquisitely carved stocks along with beautiful engraved inlays.

Very good as reconverted to flintlock configuration. The barrel has a dark brown/black lacquered finish mixed with a dark brown patina. The lock has a brown patina. The brass and silver have an attractive aged patina. There are scattered dings and marks throughout. The stock is also very good with some small repairs, mostly glossy surfaces aside from some worn sections near the breech, various light scratches and small dings, and partially smoothed relief carving from years of use. The lock functions fine, and the markings are legible. 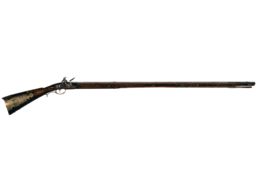 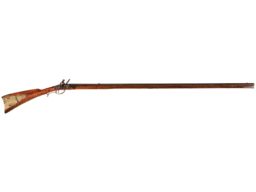 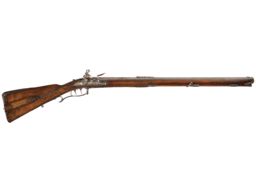 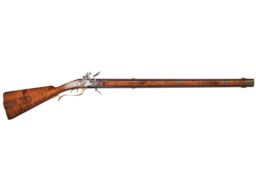 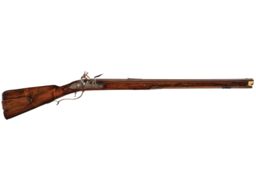 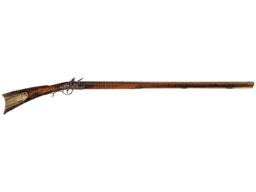