Only several thousand of these revolvers were manufactured in the 1880s by Hopkins & Allen for Merwin, Hulbert & Co. This example is one of the square butt examples and is fitted with mother of pearl grips and a lanyard ring. The grip frame shape is similar to the later Colt Bisley Model Single Action Army revolvers. It has an integral round blade front sight and top strap notch rear sight. The barrel has the Merwin, Hulbert & Co. address and patent information on top and the Hopkins & Allen address on the left. The left side of the frame is marked "CALIBRE/WINCHESTER 1873" indicating the revolver is chambered for the popular .44-40 W.C.F. cartridges. The serial number is on the butt, and the matching assembly number "3261" is on the barrel lug, cylinder, and left side of the grip frame. In the late 19th century West, the .44-40 was the most popular cartridge and many favored carrying a revolver chambered for the same cartridge as their rifle. Although less popular than the Colts and other big name revolvers of the day, Merwin, Hulbert and Co. revolvers were widely used. Jesse James carried one of their single actions. They were also used by many eastern police departments.

Very good. The revolver retains 40% of the original nickel plating and has a mottled gray-brown patina on the balance along with light pitting and oxidation. The grips are fine with some chips at the corners, wear from handling, and attractive iridescent undertones. The action functions but needs work as the cylinder does not lock up. The markings are legible, but the Hopkins & Allen marking is faint. 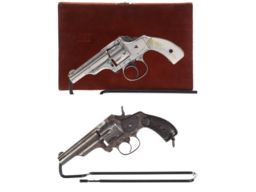 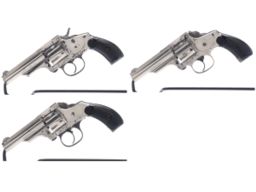 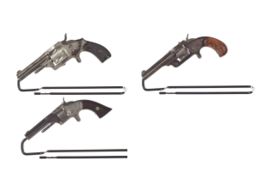 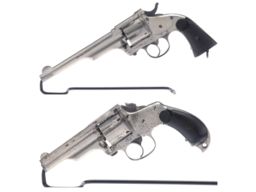 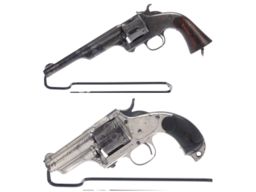 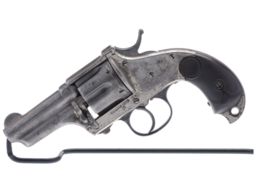