This extraordinary rifle was made by John Armstrong of Emmitsburg, Maryland and is photographed on page 484 of "The William M. Locke Collection". Started in 1808 and was active until 1822 or as late as 1841. His four sons and his apprentice, Nathaniel Rowe, were trained in his style. Armstrong's designs themselves draw from the earlier work of George Schreyer who was based in the town of Hanover just a short distance away. On page 445 of "Thoughts on the Kentucky Rifle in Its Golden Age", Joe Kindig, Jr. writes: "John Armstrong was a fine gunsmith. He was a very good carver, and he made beautiful inlays and large patch boxes. His engraving is very good." Kindig notes that Armstrong used the same attributes many times over. This creates less variety in his work, but allowed him to really hone his skills on particular details. This example is incredibly similar in ornamentation to the example pictured on page 449 of the above book. Note the eagle engraved on the cheekpiece plate, the patch box designs, heart inlays on the tear drop flats, and the relief carving and checkering on the left side of the butt. The rifle on page 452 is also very similar. Other examples of Armstrong's work, which also utilize similar designs, are on page 72 of "The Kentucky Rifle" by John G. W. Dillin and in "The Emmitsburg School" section of The Kentucky Rifle by Merrill Lindsay. This is only the second rifle built by Armstrong using the percussion system that the writer is aware of and was likely produced late in his career. The barrel has blade and notch sights as is common on American long rifles. The rear section of the barrel has a inlaid brass plate inscribed with "John Armstrong" in script. The lock plate has a script "JA" marking at center. The lock plate and hammer have coordinating engraving patterns. It has a full length maple stock with twelve silver inlays. The stock has a large, ornate patchbox with a spring release button on the bottom of the butt and has rococo style carved accents on ahead of the stock flats, behind the ramrod entry pipe, at the breech, ahead of the patchbox finial, and on the left side of the butt extending from the buttplate to the wrist. There is a section of checkering below the cheekpiece which has a molded edge and the eagle inlay noted above. The design at the breech also has some checkering. The rifle has a long brass forend cap. The buttplate is mostly brass except for a small piece on the heel.

Exceptionally fine. The rifle has a mottled mixture of faded original brown finish and brown patina along the length of the barrel which also has moderate pitting at the breech. The lock now has a mostly gray patina with some light pitting. The brass components have primarily a lightly attractively aged patina. The trigger guard has a heavier aged patina. The interior of the patchbox has bright verdigris. The silver components have a darker aged patina, especially on the cheekpiece plate which is blackened. The stock is very good as lightly sanded and reoiled. The checkering near the breech and part of the carving is smoothed, there is some minor flash damage near the bolster, and otherwise only limited slight dings and light scratches. The lock and set triggers function fine. This is a beautiful rifle built by one of the classic early American rifle makers. It has all the hallmarks of a Golden Age rifle: fine lines, an ornate patch box, carving, engraving, and silver inlays. This is quite possibly the finest known example of a John Armstrong percussion long rifle, and once a part of the famous William Locke collection! 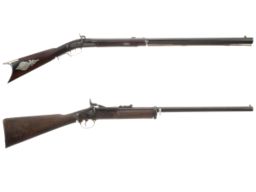 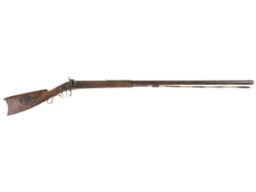 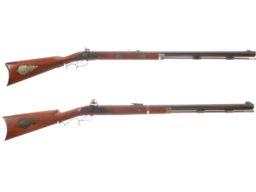 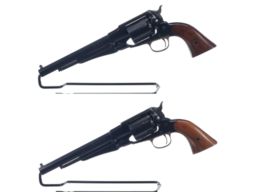 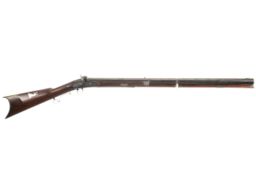 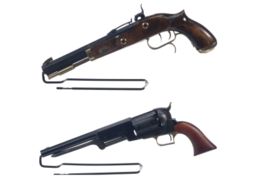