Fine. The barrel and cylinder retain about half of the period refinished blue finish. The hammers have straw-like colors, and the trigger has bright case colors. There are some small dings and minor marks. The right grip panel is fine with some edge wear and light scratches. The left grip panel is has a tension crack from top to bottom and some minor edge wear. The action functions fine, but the cylinder must be hand turned. The Walch revolver is a very rare and unusual firearm and was manufactured under the auspices of Oliver Winchester early in his involvement with firearms.

This is one of approximately 2,000 brass frame variations of the Walch Double Hammer revolver manufactured from 1860 to 1862 for John Walch and partner J.P. Lindsay by New Haven Arms Company controlled by its president and major stockholder Oliver Winchester and was made in the same factory and at the same time as the Henry rifle. This example has the light factory engraving on the frame. It fires ten shots from five chambers. The cylinder is twice as long so that two loads can be put in the same chamber. There is a channel leading from the front load to the right nipple, and the left nipple fires directly into the rear of the chamber. When the trigger is pulled, the right hammer drops firing the front load. The trigger must be released before it can be pulled a second time to fire the rear load. The top barrel flat has the two line New York address and patent date marking. The matching serial number is marked on the frame under the grip and the underside of each grip panel. It has a brass post front sight and a notch in the left hammer for a rear sight. It is fitted with smooth, varnished grips. Some Walch revolvers were privately purchased and carried by Union soldiers during the Civil War including by the whole of Company I of the 9th Michigan Infantry. 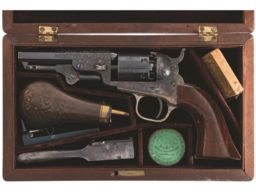 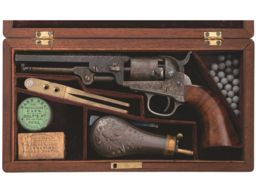 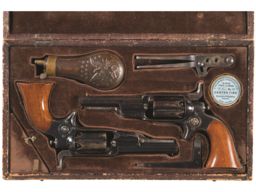 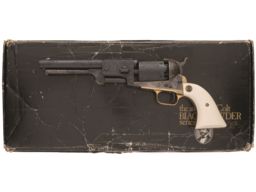 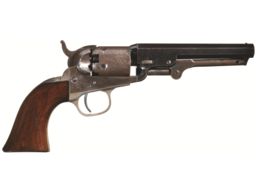 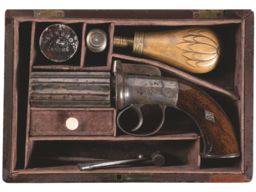