Introduced for World War 1, the French 1917 represents one of the earliest attempts to field a semi-automatic rifle as the standard-issue arm of a national military, following shortly after Mexico's Mondragon and France's own Meunier rifle. In contrast to the Mondragon, which was such an intricate weapon that only the Swiss could handle manufacture, the 1917 is a simpler, more robust weapon, operating on a gas-port driven long-piston action, leapfrogging the "gas trap" stage American and German semi-autos had to wade through, and unlike the Meunier the 1917 was designed to use the ammunition and some spare parts from the then-standard Lebel bolt-action, reducing the logistics burden of introducing the firearm. As newer designs were introduced, the 1917 was relegated to Colonial duty and converted to straight-pull bolt action by the simple measure of disabling the gas port. Blade front and ladder rear sights, with a fixed battle notch on the rear sight and "MAS 1917" date on the chamber. The left side of the receiver is marked "MANUFACTURES NATIONALE MA-S Mle1917" ahead of the safety switch, with a hinged magazine and a manual hold-open on the right side. Smooth straight grip stock, with grasping grooves on the forearm, matching serial number and "NOVEMBRE 1917" date on the buttstock and a steel buttplate.

Fine, with 60% of the blue finish, showing areas of brown patina and scattered handling marks. The stock is also very good, with a number of dings, scuffs, chips and scratches. The retention clip for the magazine cover is absent. Mechanically operates when hand cycled, firing pin is broken. 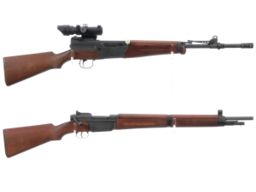 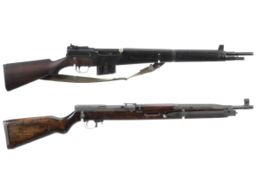 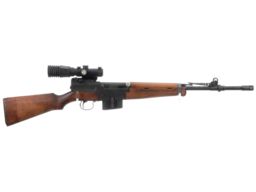 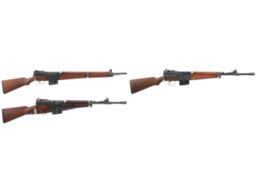 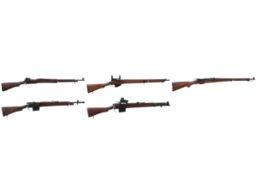 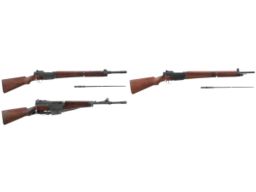