The trapdoor design was developed by Springfield Arsenal Master Armorer Erskine Allin at the close of the Civil War in an effort to update the substantial number of percussion rifles on hand and were now obsolete. Only 5,000 of these First Model Allins (also known as the Model 1865) were manufactured. The overall design and philosophy of the conversion (remove a section of the breech, mill a chamber into the barrel, and install a hinged breechblock) remained consistent through all produced versions of Allin's system. However, the First Model has some special features such as the retention of a 58 caliber bore, a more sweeping profile to the top of the breechblock, and a spring loaded extractor/ejector assembly. The ejector/extractor was eliminated from later models in favor of less intricate extraction system. It also features blade front and two-leaf rear sights, the partial date "864" marked ahead of the tang, and the original Model 1863 "eagle head" proof at the breech. The lock plate is marked "1865" behind the hammer and has with the American eagle motif and "U.S./SPRINGFIELD" at the front. The breech lever is checkered and rests within the original bolster cutout. It is fitted with an oil finished straight wrist walnut stock with three "U" marked barrel bands, two cartouches on the left flat, tulip-head ramrod, and a smooth "US" buttplate. The muzzle is fitted with a tompion.

Fine. The lock has a gray brown patina, and the breechblock has strong "blue" case colors. The remaining components are partially bright with some brown patina forming and slight pitting. The stock is very good with light scrapes and small dents. The markings are remain mostly distinct. The action functions very well. 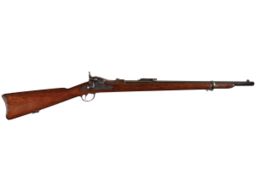 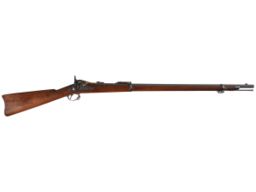 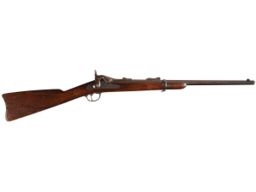 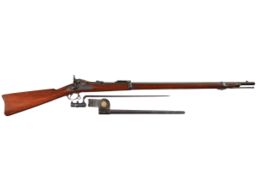 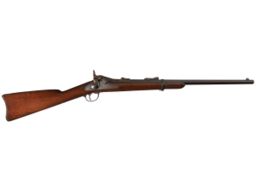 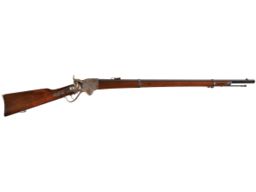