Manufactured in 1847 at the Whitneyville, Connecticut factory of Eli Whitney, Jr. Colt manufactured 220 pistols marked "A COMPANY No 1" to "A COMPANY No 220". The A Company revolvers were the second group of 220 assembled by Colt. These revolvers were inspected and shipped from Whitneyville to the New York Ordnance Depot on August 6, 1847. The A Company Walker Revolvers arrived at the Ordnance Depot at Vera Cruz, Mexico, on October 22, 1848. Some of the A Company revolvers were part of the 394 revolvers issued to the 1st Regiment of the Texas Mounted Volunteers commanded by the former Texas Ranger, Colonel John Coffee Hays. The remainder of the A Company Walker Revolvers were issued to Company C, U.S. Mounted Rifles on November 19, 1847. Both the Texas Mounted Volunteers and the U.S. Mounted Rifles saw action in Mexico during 1847 and 1848. The Texas Mounted Volunteers turned in 191 Colt Walker revolvers when they were mustered out of federal service on May 8, 1848. Only 82 of these revolvers were listed as serviceable. Some of the serviceable revolvers were subsequently issued to the 2nd Dragoon Regiment and federalized Texas Rangers in 1849-50. The U.S. Mounted Rifles served in Oregon and California from 1849-51. Revolver No. 126 is one of 40 A Company Walker Model Revolvers on the list of surviving Walker pistols on page 79 of "The Colt Whitneyville-Walker Pistol" by Lt. Col. Robert D. Whittington. The revolver has the distinctive half octagon nine inch barrel with German silver front sight blade and hinged round tip loading lever secured by a T-shaped spring. The massive six shot cylinder has oval stop slots and a single locking pin in the rear face. The frame has cut-outs at the back for the forward contour of the grip. The trigger and cylinder stop screws do not pass through the right side of the frame. The brass square back trigger guard has a distinctive broad base. The back strap is iron. The top barrel flat is marked with the one line address "ADDRESS SAML COLT NEW-YORK CITY" reading toward the muzzle. The left side of the barrel lug and the frame are marked "A COMPANY No 126" above the wedge slot and below the cylinder respectively. The right side of the barrel lug is stamped "US" directly above the wedge screw. "A COMPANY No 126" is also marked on the butt and the cylinder and front of the trigger guard are marked "A COMyNo 126" in tiny letters. The revolver was finished in blue with a brass trigger guard and it is fitted with a one piece "Slim Jim" profile smooth walnut grip.

Very good as restored overall. The metal surfaces have a dark artificial brown patina with some scattered minor pitting on the barrel and frame. There are several minor dings on the cylinder. The trigger guard has an attractive aged patina. The loading lever assembly is a modern replacement. The grip is good with scattered minor dings and dents. All of the markings have been recut to make legible. There is no cylinder scene visible, otherwise, the markings are clear. There is some slight marring of the frame screws. The action is fine. Colt expert R. L Wilson identified 175 surviving Colt Walker Model Revolvers from the total production of 1,100. Robert Whittington stated that 150 U.S. contract Walker Model revolvers had been identified when his book was published in 1984. All Walker Model Revolvers are extremely rare and desirable. This is a rare example of a historic Colt Walker Revolver from the original group of A Company revolvers issued to the Texas Mounted Volunteers and U.S. Mounted Rifles during the Mexican War. 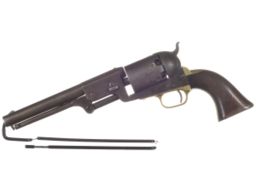 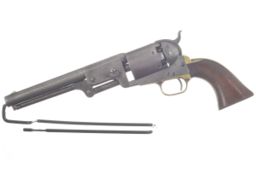 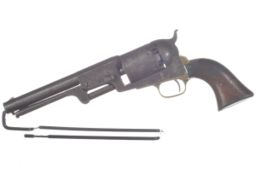 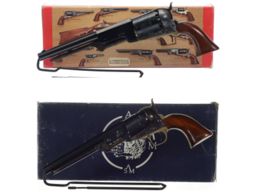 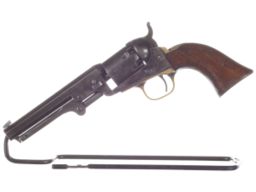 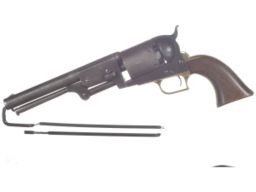