This is an attractive example of a late production post-war refurbished DWM Model 1914 Navy Luger dated 1917. These later Model 1914 Navy Luger are very distinctive in that they lack the grip safety, are fitted with a stock lug and have the flat checkered toggles. These were issued during WWI and then subsequently reissued during the Weimar period where most were altered to a 4 inch barrel configuration in compliance with the Treaty of Versailles making these original models fairly scarce. This example has its original six-inch barrel with the correct two-position Navy rear sight adjustable from 100-200 meters. As noted, the chamber is dated 1917, and it is also correctly stamped with the 1917 date on the left frame rail and left side front sight base. The front toggle has the standard "DWM" logo, with a single "Crown" firing proof next to two "Crown/M" Navy proofs on the left side of the barrel extension. The left side of the barrel also has a single "Crown" firing proof with a small "Crown/M" proof on the underside of the barrel. It is complete with a WWI era Navy type magazine with a tin-plated body with a unmarked wooden base.

Very fine as refurbished with 98% of the post-war blue finish overall and only edge and high spot wear. The smaller parts show 95% of their straw colors overall with the trigger having been restrawed. The grips have a lighter honey colored appearance with nice distinct checkering and minimal handing marks. It has matching numbers except the magazine and grips which are unnumbered. Mechanically excellent. 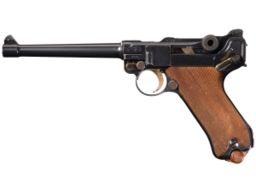 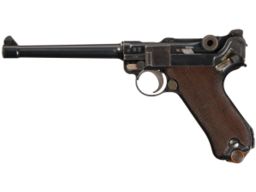 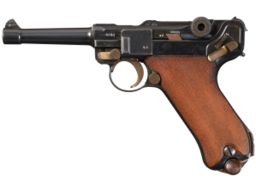 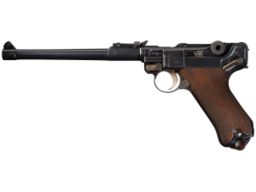 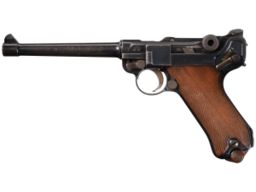 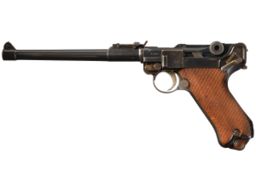