This U.S. Colt Cavalry SAA revolver was manufactured in early 1887 as part of the eleventh government contract and was inspected by David F. Clark at the end of his career as a sub-inspector. It is rare for revolvers in this range to remain unaltered given many were converted to "Artillery" configuration or otherwise altered or destroyed by the U.S. armories or subsequent civilian owners. "DFC" inspection marks are on the bottom of the barrel proceeded by a "P" ahead of the serial number on the frame, the side of the cylinder (also marked "P"), and the bottom of the grip on the left. The grip also has "1887/JGB" (Capt. John G. Butler) on the left side, "32" on the bottom right, and a "DFC" cartouche on the right side. Captain Butler's final inspection mark is the only one in the entire U.S. Single Action Army series with unbordered initials. This revolver falls within the correct range for John G. Butler inspected revolver. Kopec and Fenn list the range as 119047-121238 in "Colt Cavalry and Artillery Revolvers: A Continuing Study." The 32 is likely a militia or Army unit marking. Groups within this 11th Army contract range are known to have been issued to the 6th Cavalry, 7th Cavalry, 10th Cavalry, U.S. Post Office, New York Militia, and the State of Georgia. One just five serial numbers away is listed by Kopec and Fenn in the New York Militia issues list. The back strap inlet is hand marked with the partial serial number "1042." The full or partial serial numbers on the various other components all match. The top of the barrel has the one line address, and the left side of the frame has the patent dates in three lines followed by "U.S." Interestingly, the loading gate has "1042." The hammer has coarse, bordered knurling and the sights are the standard rounded blade front and frame groove rear style.

Very fine. The barrel retains 75% of the bright original blue finish with most of the loss at the muzzle. The cylinder has 60% original blue and a broad drag line. The frame has 50% of the original case colors overall and the hammer retains the majority of the deep case colors. The grip frame displays strong blue finish on the top of the back strap and on and around the trigger guards. The balance has gray and brown patina as well as some light spotting and slight oxidation primarily on the cylinder. The grip is fine overall with sharp original cartouche on left, weak on the right. There is some mild edge wear and scattered, minor dings and scratches. It is mechanically excellent. 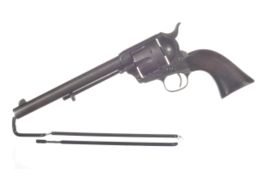 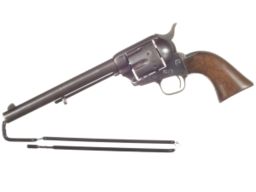 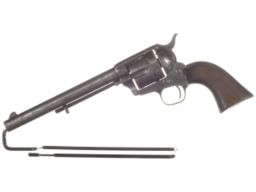 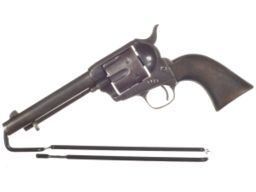 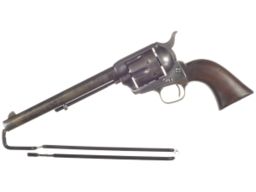 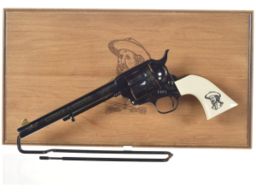