Lot 1408: The Imperial Twins, a Superb and Historic Matched Pair of Full H

Lot 1408: The Imperial Twins, a Superb and Historic Matched Pair of Full H

This pair of fallow deer mounts, remarkable for their matching antlers, were said to have been chosen by jagermeister (hunting master) for Kaiser Wilhelm I and Emperor Franz Joseph to hunt in 1873, to celebrate the 25th Jubilee of the Emperors reign. The twins were kept separate from the rest of the herd, until the two Imperial cousins met to enjoy their shared passion of hunting. 1873 was also the year in which the League of Three Emperors was formed, an alliance of the Kaiser of Germany, The Tsar of Russia, and the Emperor of Austria- Hungry as an attempt to maintain peace in Europe. The central piece of each mount is a superbly carved full-sized fallow deer head, rendered in expert detail, no doubt by a master of the craft, emerging a full 19 inches from the finely carved plaque, which has been rendered in an oak leaf wreath pattern with the date "1873/2 X" (October 2, 1873) at the bottom surrounding an Imperial eagle medallion, one from Germany and one from Austria-Hungary. The antlers themselves are grand and broad, 29 1/2 inches wide on the Austria-Hungary mount and 30 1/2 on the German mount, each showing deep veins and excellent points. Deeply rooted in European tradition as a nobleman's game, hunting was the go-to sporting activity of Europe's elite, where week long trips to secluded lodges could give leaders and VIPs the chance to socialize and talk shop outside the confines of court. 1873 was a big year for the freshly minted German Empire, and just 20 days after these trophies were taken one of Otto von Bismarck's master strokes of European policy came to fruition with the formation of the League of the Three Emperors, an alliance between Germany, Austria-Hungary, and Russia to set and manage the status quo in Eastern Europe. While this League was pitched to the others as a way to keep radicals and ethnic elements in line, its main purpose was to preemptively block a possible hostile alliance between Austria-Hungary, Russia, and France; if two of them aligned against Germany, the third would be free to make exorbitant demands of Germany in exchange of their support. An understanding had been reached between Germany and Austria-Hungary as early as June, and no doubt the final steps of securing the League were among the dinner table conversation of the two monarchs, in addition to what was no doubt some of the highest level diplomatic business on the continent. Additionally, the date in question was during the jubilee year of Franz Joseph, just 2 months ahead of his 25th anniversary as Emperor of Austria and King of Hungary, Croatia, and Bohemia.

Very good. These Trophies have survived crossing the Atlantic, two World Wars, and the ravages of time. The antlers are in excellent shape, and the carved mounts are very good as later production items (the originals, damaged beyond repair, were directly referenced in their construction), with a few minor edge chips around the bases of the antlers and minor handling marks. The plaques show some mended cracks and chips, with some repaired breaks on the German plaque. Either one, without history or its counterpart, would be an impressive display piece and showcase of both the woodcarver's art and traditional European game display. Put them together, and they're a nearly unbeatable pair of wall mounts, and could serve as the anchors of nearly any display of wildlife trophies. Add in the history, and they simply can not be matched. When these items sell, there is no telling how long they'll disappear from the market, and the odds that a comparable set will emerge are vanishingly thin. Don’t miss out. 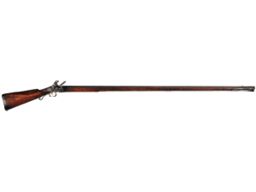 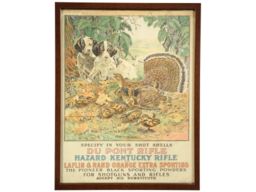 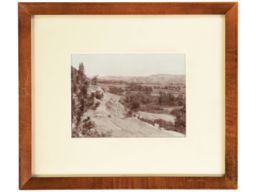 Lot #1094: L. A. Huffman "Lame Deer Valley and agency from the West Divide 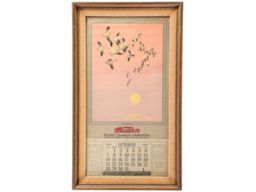 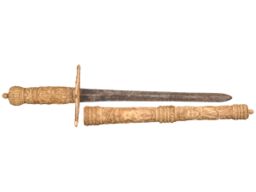 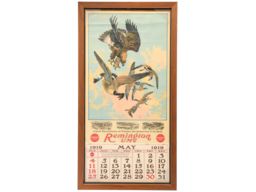