This is an exceptional example of a one-of-a-kind WWII German Mauser factory engraved and gold plated Luger pistol. This Luger pistol was owned and presented by two prominent Nazi party members with long time association or affiliations with Adolf Hitler and his rise to power in the early 1930s. Joachim von Ribbentrop was the son of a German Army officer who was born in Wesel, Germany in 1893. He served in WWI with the 125th Hussar Regiment where he won the Iron Cross. After being seriously wounded in 1917, Ribbentrop joined the Germany War Ministry and became a member of the German Delegation that attended the Paris Peace Conference after WWI. In May 1932, he joined the NSDAP, National Socialist German Workers Party, where he quickly rose in rank and eventually became Hitler's foreign affairs advisor in 1933. Later, the NSDAP evolved into the Nazi Party. He was eventually appointed as the ambassador to London. He was instrumental in the various pre-war negotiations with France and Great Britain and was also instrumental in the negotiations and signing of the Molotov–Ribbentrop Pact, a treaty of non-aggression signed in 1939 between the Soviet Union and Germany that kept the Soviets at bay until the Germans broke the agreement in June of 1941. In June 1945, he was arrested and charged with war crimes but denied any knowledge or involvement in the German concentration camps and racial extermination policies. He was later tried during the Nuremburg Trials, found guilty, and executed in October 1946. He was the first to be hanged. Franz von Papen was born in Werl, Germany in 1879, the son of a wealthy landowner. In 1914, he was posted to Washington as a military attaché; however, in 1915, he was accused of being a saboteur and was forced to leave the U.S. He joined the German Army and served as a general staff officer at the outbreak of WWI. After WWI, he joined the Catholic Centre Party (BVP) and in 1921 was elected to the Reichstag. Two years later, he purchased a controlling interest in the leading newspaper "Germania." He attempted to use the paper as means to promote his right-wing policies and was later ousted. He remained a low level political figure until May 1932 when he was appointed as chancellor by Hindenburg. Later, he lifted the ban on the Sturm Abteilung (SA) and gained considerable support from the Nazi Party. Then von Papen persuaded Hindenburg to appoint Hitler as the new chancellor and became the vice-chancellor. After supporting Hitler after the Night of the Long Knives, he was appointed as ambassador to Austria in 1934-1939 with an additional posting to Turkey in 1939-1944. In 1945, he was charged with conspiring to start WWII but was found not guilty. In 1947, the German Government charged him with crimes and offences while Hitler was in power, and he was sentenced to eight years in prison. He served only two and was released in 1949. He died in 1969 in Obersasbach. This pistol was procured for the German Ministry as a standard Commercial Police Model and has the sear safety over the side plate along with the "eagle/C" police proof on the right side of the barrel extension and the standard "crown/U" proof on the left side of the barrel extension. The chamber area is stamped 1939 for the year of manufacture with the standard Mauser Banner logo on the front toggle. The entire pistol has been meticulously engraved with traditional German oak leaf, acorn, and scroll engraving with a punch dot backgrounds for shading that covers 99% of the exposed surfaces of the pistol. The only noted area that is not engraved is the very upper portion of the rear grip strap. The engraving on this pistol was obviously performed by a master engraver given the overall layout and attention to detail is fantastic and meticulous. The side plate also has a small redition of the coat of arms of the von Papen family. The dark walnut grips have been hand carved in a large oak leaf and acorn pattern, and the left grip carries a small 1 1/2 X 2 1/2 inch inscription plate that reads: "Seiner Exzellenz/Herrn Botshafter Franz von Papen/in tiefster Verehrung/uberreicht von Joachim von Ribbentrop/Aussenminister des Deutchen Reiches." This translates to: "His Excellency/the Honorable Ambassador Franz von Papen/in deepest dedication/given by Joachim von Ribbentrop/Foreign Minister of the German Reich." This Luger is accompanied by a copy of a short letter dated 1986 from Dr. Rolf Gminder, a consultant to the Mauser-Werkes factory who had viewed the pistol, noting that it was fully engraved in a very high quality style probably executed in Suhl, Thuringia, and that the gun itself has been gold plated in the old fashion done around the 1939/1940 using the heat process (Feuervergoldung). A letter signed by Egbert von Papen from 1968 also confirms that the pistol was given to his "great uncle Franz von Papen by Joachim von Ribbentrop in appreciation for their long friendship." The pistol is accompanied by an original Mauser factory leatherette case with green felt interior that has individual compartments for the gold plated accessories: carved handle cleaning rod, takedown tool, punch, and second magazine with wood base correctly numbered "00."

Excellent with 99% of the original factory gold plated finish showing some minor collector handling marks from the gun being cycled over the years. The carved walnut grips are also in excellent condition. The case and noted accessories are all in excellent condition. The pistol has all matching numbers, including on the gold plated magazine. It is certainly a one-of-a-kind, historic, gold plated, German presentation Luger pistol given by the former German Chancellor and Vice Chancellor Joachim von Ribbentrop to influential ambassador Franz von Papen. 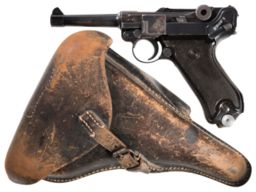 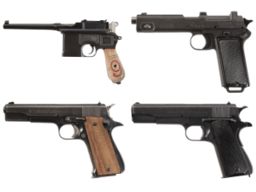 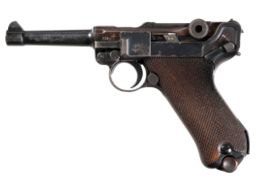 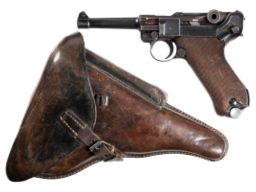 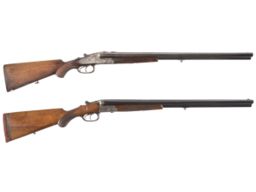 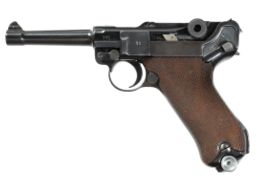