This rifle is one of the rarest and most desirable of all the WWII MP43/44 series of fully automatic weapons we have had the opportunity to sell. The M.Kb.42(H) is truly the grandfather of the German Assault rifles, and also for any follow-on assault designs produced after WWII to include the vaunted AK47. Consequently this would be a pivotal piece in any advanced WWII German or military assault rifle collection and is probably one of a handful of legal fully registered, and fully transferable M.Kb.42 (H) available for sale! The story for this rifle really started in 1935-37 with the requirement from the German High Command to develop a new "intermediate-range" 7.92mm cartridge. That new cartridge design was finalized in 1938 and resulted in the 7.92 X33 Kurz round. Once finalized the Heerswaffenamt issued a new requirement for a fully automatic assault rifle to be developed using this new intermediate-range cartridge. In 1939/40 the C.G. Haenel firm was tasked with producing a prototype rifle design using this new 7.92mm Kurz round. Not to be outdone the Walther company also decided to develop and submit a prototype design on their own to compete with the Haenel Company for any future military contracts. The rifle was quite unique in that it used mostly sheet metal stamped parts with a limited number of machined parts; basically the bolt, barrel assembly and some springs. It also used a revolutionary new design that employed a short operating rod housed inside a full-length gas tube, located above the rifle barrel. The tube was connected to the barrel via a front gas block which bled off gases to cycle the action. The design was well received by the German High Command and Haenel was awarded a follow-on contract for further production and development of this weapon. This rifle design was continually improved upon throughout the war and eventually evolved into the MP 43/44 designs issued to various Wehrmacht and Waffen-SS troops during the Battle of the Bulge. The Haenel factory continued to improve the design which finally evolved into the final "StG 44" rifle. Some of this follow-on work included the development of a suitable sniper scope mount and base system for this rifle. The work resulted in this rifle having the rare, two small bulges on each side of the rear sight base that would be eventually used to mount a rare sheet metal scope mount (not included with this rifle). This new scope mount followed the same concept as the Mk 42 rifles in that the mount used a flat sheet metal design, folded and welded with minimal machined parts. There is a fairly detailed write up on these early super rare rifles and the even rarer "sheet metal" sniper scope mounts in the book "The German Sniper" by Senich on page 369-381. This weapon is fully functional and is marked on the left rear side of the receiver with the early serial number of "8214" with no letter suffix followed by: "Mkb.42.(H)" on the upper receiver. The underside is stamped with a small "fxo" manufacturers mark for C. G. Haenel along with "COS" the wartime manufacturers code for the Gebruder Merz, Merz-Werke, in Frankfurt. They made sheet metal stampings and were the producers of the stamped receiver shell. It has an all blued wartime finish with a walnut (not laminated) stock. This rare assault rifle comes with an original leather sling only (with no magazines).

Excellent with 95% plus of the original blue finish overall with minor wear and blue loss on the edges and high spots overall, and the balance a very nice deep original blue finish. The buttstock is in very fine condition with a medium brown color, showing minor handling marks and light pressured dents on the sides from field use. All the visible numbers are matching. A super nice, extremely rare early production C. G. Haenel Mk(b) 42 (H) assault rifle. NOTE: This item is restricted as a National Firearms Act (NFA), Fully Automatic Weapon that is currently registered with the Bureau of Alcohol, Tobacco Firearms and Explosives (BATF&E) that has been classified as a "Curio or Relic" as defined in 27 CFR, 478.11. These weapons are still subject to the provisions of 18 U.S.C. Chapter 44 and 27 CFR part 478. 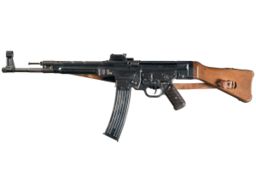 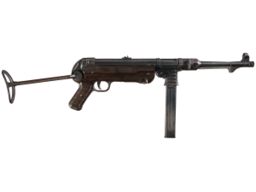 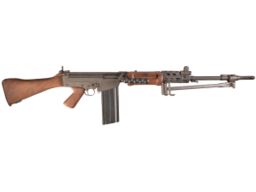 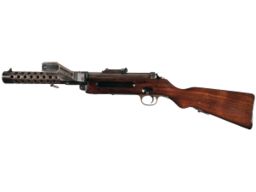 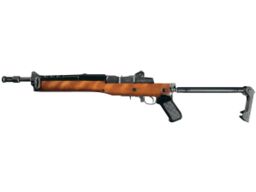 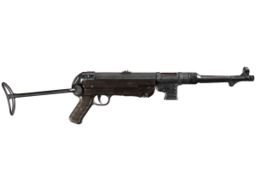