This is a unique example of a Japanese prototype semi-Automatic rifle that was designed by Dr. Masaya Kawamura in the mid 1930's. After WWI the Japanese Imperial Army was interested in developing a semi-automatic service rifle. This rifle is one of the aforementioned examples of a semi-automatic rifle design based on the delayed breech, toggle-locked mechanism. It is chambered for the early 6.5 mm Japanese cartridge that was fed from a extended box magazine (which is missing from this rifle). The rifle is actually unmarked except for the serial number with this example actually being composed of two different rifles. The top half (to include the receiver) is serial numbered "12" which includes the receiver, complete toggle/bolt mechanism and front gas system. The lower portion which includes the lower receiver/trigger group is numbered "13" with some of the smaller parts also numbered "13", which indicates it was actually used in some early functioning/interchangeability tests. It is fitted with a blade front sight and a elevation adjustable rear sight. It is fitted with a hardwood stock and forend with a flat steel buttplate. The forend is actually unique in that it is split down the center to form two halves with short finger grooves on each side with five perforated heat vents on each side also. A very interesting Japanese test/prototype rifle which reportedly was made by Tokyo Steel.

Good as assembled (see above) with the metal surfaces still in the white as manufactured by the Japanese factory. The stock and forend are both in very good condition showing minor light handling marks on the sides with a couple small chips on the left side of the buttstock one in front and two behind the sling swivel. The refinished stock and forend have had a light cleaning with the wood stained and varnished to preserve the wood. Mechanically functions, but needs work as a forward lever falls out of forearm. Magazine is absent. 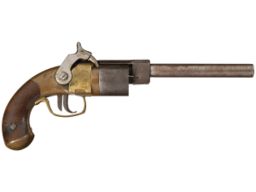 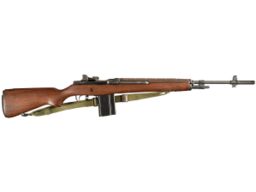 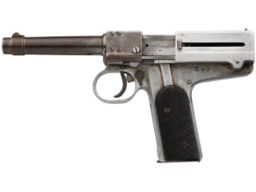 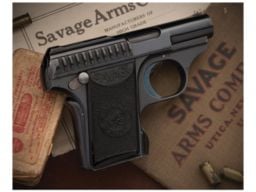 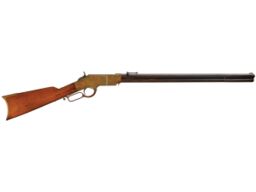 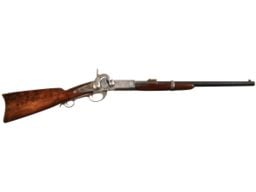