This is an extremely rare example of a U.S. Army, Springfield Armory Model T3E2 semi-automatic rifle that was manufactured in January 1931. The U.S. Ordnance Board had been in the process of conducting testing and evaluating to select a new semi-automatic service rifle from 1922 through July 1929. After completion of all testing in July the 1929, The Service Rifle Selection Board issued their report in the fall of 1929 and of the candidates that actually completed all the testing requirements, only two candidates were recommended by the board the; T1 Pedersen rifle and the T3 Garand rifle. In their report they noted both candidates had numerous areas of superiority as well as several areas of defects. Based on the final report their recommendation was that the Chief of Ordnance proceed with the manufacture of an additional "20 T3 Garand rifles in caliber .276, eliminating the noted defects in the boards report and also improving the design. Additionally the board recommended that an additional "pilot" T3 Garand rifle be manufactured in ".30 Caliber". The first model was designated as the T3E1, this was the first series of rifles that eliminated the earlier deficiencies and the second series of rifles completed showed the improvements and were designated the Model "T3E2", which is what we have for sale here. This exact rifle is serial number "15" and is actually pictured in the excellent book "The Gas Trap Rifle" by Pyle on page 51. This beautiful rifle shows the start of the many of the early designs that evolved into the "Gas Trap" series of m1 rifles and eventually the standard M1 Garand Rifle. The rear of the receiver behind the rear sight it is marked: "U.S. /SPRINGFIELD/ARMORY/JAN. 1931" and on the heel of the receiver it is stamped: "GARAND PATENTS/SEMI. AUTO. RIFLE/T3E2/CAL..276/ NO. 15". The barrel is unmarked and it is fitted with the sheetmetal rear handguard/barrel cover. This rifle has a one-piece gas cylinder with the a single gas plug/screw on the front end. The rifle sights consist of a standing blade front sight with no protective ears and machined windage and elevation adjustable rear sight, with flat knobs fitted with locking nut on the right side. It is fitted with a full length operating rod with the distinctive tilting style (M1) bolt with two locking lugs on the left side with a single lug on the right side, with the long flat extractor spring, all exhibiting the early Garand features. The top of the right bolt lug, and the top and rear end of the operating rod are all numbered "15". The stock is a one-piece full length design reminiscent of the 1903 Springfield as it has short finger grooves on each side with a pistol grip with the flat underside similar to the 1903 "NB" style stocks. It is fitted with a flat, checkered buttplate with no provisions for a butt trap. Eventually this rifle would be overshadowed by the eventually adoption of the ".30 Caliber" Garand rifle based on the recommendation of then General Douglas MacArthur.

Excellent with 95% plus of the original Springfield Armory blue/parkerizing with only minor wear on the bolt lugs from cycling the rifle. The stock is also in excellent condition with only minor handling marks on the sides, with two small Armory repair plugs on the left side below the rear of the receiver. Additionally there is a very small crack just starting on top of the pistol grip area. Mechanically excellent. An exceptional and very rare example of a Prototype Springfield T3E2 test semi-automatic rifle. 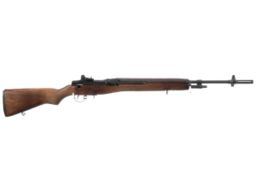 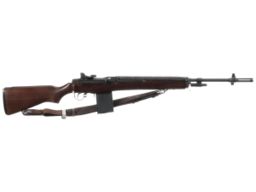 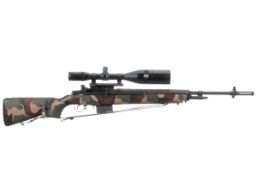 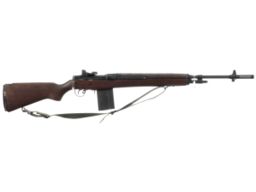 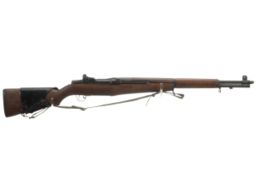 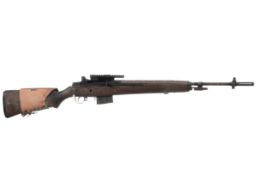