This beautiful rifle is inscribed as a prize rifle for the World's Columbian Exposition held in Chicago in 1893 to celebrate the 400th anniversary of Christopher Columbus's voyage to the New World. Women were particularly active in the Chicago fair due to the Women's Building which was said to be just slightly less popular than the Ferris wheel in terms of the fair's attractions. Helen Foster Barnett (born Helen A. Foster in 1852, died 1920) was the wife of Dr. James P. Barnett of Brooklyn, New York. His death in 1886 left her to raise their children, but their family was wealthy and thus secure. She was a well-known philanthropist in the late 19th century and was a patron of the arts, devotee of the Beaux-Arts movement, and was a member of the National Association of Women Painters. A prize for sculptors under 35 was named in her honor from the National Academy of Design. She was connected to the famous sculptor Augustus Saint-Gaudens, his Cornish Art Colony in New Hampshire were she spent some of her summers, and his brother's wife and fellow sculptor, Annetta Johnson St. Gaudens. Barnett introduced the Saint-Gaudens Medal in his honor after his death in 1907. In addition to his many well known sculptures and coin designs, Augustus Saint-Gaudens was one of the artistic advisors to the Columbian Exposition and designed the fair's commemorative presentation medals. He was also a member of the team that planned the National Mall in Washington, D.C. The Winchester Model 1892 design is discussed in the official record of the exposition in detail. The rifle is accompanied by a Cody Firearms Museum letter and a four page evaluation letter by Winchester expert and author George Madis. The Cody letter lists the rifle features as: "Rifle/38 caliber/Octagon barrel/Plain trigger/Fancy stock" and "1/2 magazine" and states that it was received and shipped on November 22, 1893, as part of order 4893 and returned for repair on July 29, 1897. The return date may be due to the rifle being sent out to another World's Fair. There were multiple in 1897, including the Irish Fair in Chicago, Tennessee Centennial and International Exhibition in Nashville, Brussels International Exhibition, and a few others. In addition to the features listed in the Cody letter, the rifle muzzle, lower third of the barrel, forearm cap, receiver, bolt and buttplate heel are engraved with American style scroll work on a punch-dot background with elaborate border work. The left side of the receiver is engraved with a highly detailed game scene featuring a bull elk, and the right side has a scene that features a running hound. Delicately engraved, silver "Tiffany" inlays are fitted at the junction of the stock and the receiver, they have fluer-de-lis finials. An engraved brass compass is inlaid in the center of the right side of the stock. The assembly number, "I355," is marked in the inlet for the upper tang. The barrel has a Lyman "Hunting" blade front sight and an elevation adjustable sporting style rear sight with flat top. The left barrel flat is inscribed with: "Made for, Helen A. Foster. Prize Rifle Columbian Exposition." Madis' letter describes this rifle in great detail and identifies L.D. Nimschke as the engraver. Madis concludes: "Number 20103 is a truly outstanding collector arm. With the rare artistic work on the metal and stock, rarity, condition and great historical importance of this rifle, it merits a prominent place in any collection or museum."

Very good. The barrel, forearm cap, receiver, and buttplate has faded to plum brown and silver-gray patina. The barrel has a very attractive, smooth, plum patina, and the forearm cap receiver, bolt and crescent buttplate are silver-gray. Traces of the blue finish are visible in the loading gate, and there is some original silver plating on the lower tang. The intricate engraving and highly detailed game scenes remain deep and sharp. The delicate engraving on the Tiffany stock inlays is crisp. The highly figured, fancy grade walnut stock and forearm have been refinished and remains in very good condition. The recut checkering on the stock is extremely sharp. The pin at the front of the compass is absent. This is an extremely rare Model 1892 rifle in solid representative condition. As the Madis letter states: "it merits a prominent place in any collection or museum". 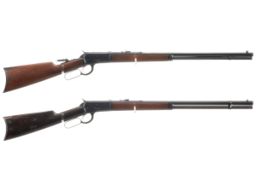 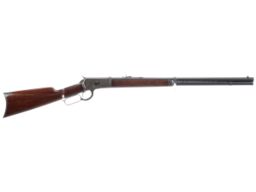 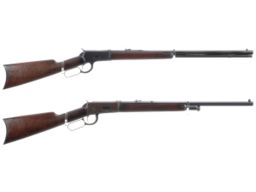 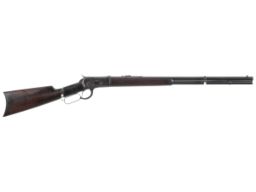 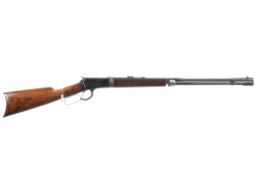 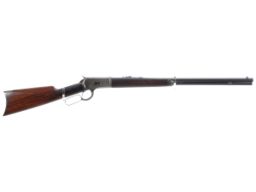