This revolver is one of the earliest production Smith & Wesson No. 2 Army revolvers in existence and is in amazing condition. It would have been manufactured in 1861 based on the two digit serial number and may have been carried during the Civil War as a privately purchased sidearm. 77,155 were manufacture before production ended in 1874. They were one of the few cartridge handguns available in the mid-19th century and were popular well after the Civil War ended. The use of .32 caliber rimfire cartridges were what made them popular and also prevented them from being adopted as official military arms since the .32 was weaker than traditional cap and ball loads used by the Army and Navy. Nonetheless, 2,600 were purchased for the Kentucky Militia and others were owned by Wild Bill Hickok, General George Armstrong Custer, several Union officers, President Rutherford B. Hayes, Texas Rangers, police officers and common soldiers in the 1860s and 1870s. This example has the correct two pin top strap found only on the early revolvers and is marked "SMITH & WESSON SPRINGFIELD. MASS." on the top of the rib, patent dates on the cylinder, "32" on the butt and underside of the right grip panel and "O" assembly number visible on the barrel lug, front face of the cylinder and left side of the back strap.

Very fine. 85% plus of the original bright high polish blue finish remains. The hammer retains 60% original case colors. There is some light spotting and edge wear. The grips are very fine and have minor handling and storage marks. The action functions fine and the markings are crisp. Early Smith & Wesson No. 2 Old Model Army revolvers are incredibly rare and very rarely are found in high condition. 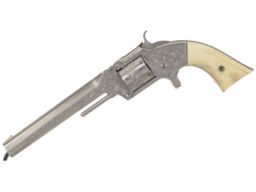 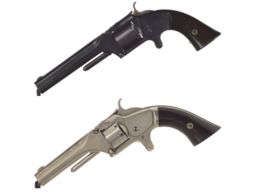 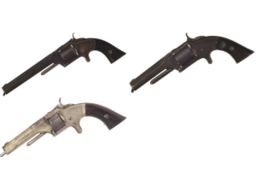 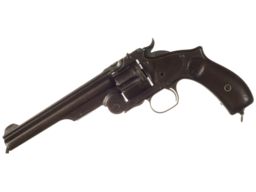 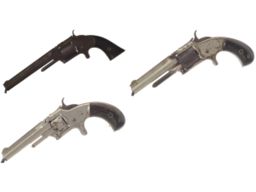 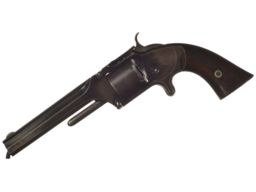