Rock Island Auction Company is proud to offer for the twice signed Conrad F. Ulrich masterpiece: The Three Graces Winchester Model 1866 deluxe lever action musket. Certainly one of the finest Winchester firearms ever produced, this musket has been an icon in the field of fine arms collecting for half a century and has been widely photographed and discussed during those many decades. The musket, serial number 78143, is the only known cased and engraved Winchester musket known to exist. This is the only Winchester musket of any model known to be cased. The deluxe treatment alone for a Model 1866 musket is highly unusual for it is essentially a military style longarm. Over the years, the musket has been well-documented. It was featured on the dust jacket to R.L. Wilson's book "Winchester: An American Legend," the cover to the June 1991 issue of "American Rifleman," pictured and described in R.L. Wilson's book "Winchester Engraving" and used in advertising literature for the Antique Arms Shows (Las Vegas, Reno and Nashville) in 1992. According to Wilson in "Winchester Engraving," the original owner of this musket was Thomas Witherell Palmer, a noted figure in Detroit, Michigan, history. Palmer was born in Detroit and served as first president for the Michigan Society for the Prevention of Cruelty to Animals (now the Michigan Humane Society) and was one of the founders and first president of the Detroit Museum of Art (now the Detroit Institute of Arts). From 1879 to 1880, he served as a member of the Michigan State Senate and was later elected to the U.S. Senate in 1883. During his time on the U.S. Senate floor, he advocated for women's suffrage, immigration restrictions, and homesteader rights. He is widely credited for coining the phrase "Equal rights for all, special privileges to none," a motto used by latter day reformers. President Benjamin Harrison appointed Palmer as the U.S. Minister to Spain, a position he held from June 1889 to April 1890. He went on to be president of the National Commission of the World's Columbian Exposition in Chicago from 1890 to 1893. Palmer died in his hometown of Detroit in 1913 due to injuries caused by a car accident. At the time of his wife's death in 1916, the Palmer estate was estimated to be worth $5 million. A large portion of the estate went into the establishment of the Merrill Palmer Institute for Motherhood and Home Training (now the Merrill Palmer Skillman Institute part of Wayne State University). As stated, the musket was embellished by Master Engraver Conrad F. Ulrich. The highly revered artist signed the musket twice on the lower tang with the signatures ("C.F. ULRICH") appearing behind the trigger and near the lever latch. The double signature is scarce for Ulrich guns. As Wilson explains, "Signed guns by C.F. Ulrich are scarce; those signed more than once are extremely rare." There are seven highly detailed, deep relief panels on the sides of the receiver. The grand motif of the vignette after the neoclassical work "The Three Graces" by Antonio Canova takes center stage on the left side. (Canova's statue in marble depicts the daughters of Zeus who represent beauty, charm and joy.) The remaining depictions are more lighthearted, taking on a whimsical feel to classical imagery. Also on the left side of the receiver is a hunting dog and a fox with a large elephant peering around "The Three Graces." The right side features deep relief panels of a female acrobat with her show horse, a buck, a squirrel and a tiger. Over 95% of the receiver is engraved with the remaining surfaces exhibiting scrollwork, geometric motifs and artistic borders. Even the cartridge elevator was not forgotten. The musket is equipped with a pinned front sight, which also acts as a bayonet lug and a folding ladder rear sight graduated to 900 yards. Sling swivels are attached to the middle barrel band and underside of the buttstock. Mounted with smooth deluxe grain walnut forearm and buttstock. The stock is fitted with a crescent buttplate featuring a trapdoor compartment (4-piece cleaning rod is included) and engraved scrollwork on the tang. The rosewood case has silver plated hardware, including the corner protectors, and is lined in red velvet. The case has cut-outs for the musket, two cartridge boxes and saber bayonet. The case also has a compartment with a lid. With the musket is the original saber bayonet (20 inch long blade), two screwdrivers (rosewood handles, gold plated blades), case key, two boxes of Winchester .44 rim fire cartridges (green Winchester label), and one box of Winchester .44 centerfire cartridges (green Winchester label).

Excellent. The musket retains 98% bright original blue finish showing only the slightest bayonet wear. The barrel bands retain 80% bright blue with the balance thinning to a brown patina and still exhibiting original polish marks. The receiver and buttplate retain 98% bright original gold showing some only minor storage wear from its life spent in the case. The receiver screw heads retain 98% original beautiful nitre blue finish. The hammer and trigger retains 90% original case colors. The lever retain traces of darkened original blue, otherwise a mottled brown patina. The wood is excellent showing a pressure mark made by the middle barrel band and a few mild handling marks overall with nearly all of the original finish remaining. Mechanically excellent. The case is fine showing some minor handling/storage marks, a couple pieces of missing corner trim and some high spot wear to the lining with crazed finish and silver darkening with age. The bayonet is excellent. This is a once in a lifetime opportunity to own a true masterpiece by Master Engraver Conrad Ulrich that would be hard to replicate in condition, embellishment, and rarity! Coupled with a historical connection to a prominent U.S. Senator, this Winchester has it all! Provenance: Robert M. Lee Collection. 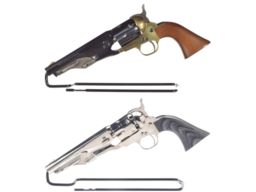 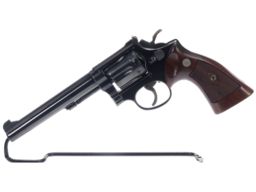 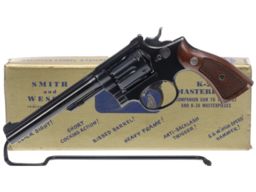 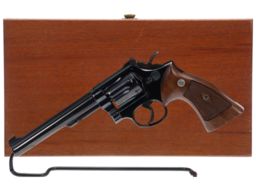 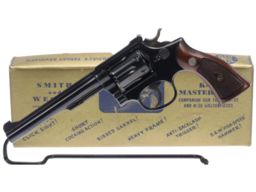 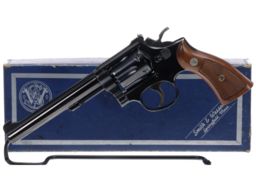