This is a near new example Winchester Model 1873 Musket that was manufactured in 1903. The musket has the distinctive 30 inch barrel with full-length forearm, three barrel bands, block front sight base that serves as a lug for a socket bayonet, military style folding leaf rear sight and carbine buttplate. Sling swivels are mounted on the middle barrel band and the stock. The frame has the Third Model integral dust cover rail and dust cover with serrated edges. The buttplate has a sliding brass trapdoor, and the butt trap contains a four-piece, jointed, steel cleaning rod. The barrel, magazine, barrel bands and frame have the Winchester commercial blue finish. The hammer, loading lever and buttplate are color casehardened. The loading gate has a fire blue finish. The oil-finished stock and forearm are straight grain American walnut. The top of the barrel is roll-stamped with the two-line legend "WINCHESTER'S REPEATING ARMS. NEW HAVEN. CT./KING'S IMPROVEMENT PATENTED MARCH 29. 1866. OCTOBER 16. 1860." between the lower barrel band and the rear sight. The caliber designation "44 W.C.F" is roll-stamped on the top of the barrel between the rear sight and the frame. "44 CAL." is roll-stamped in script letters across the bottom of the brass cartridge elevator. The upper receiver tang is roll stamped with the model designation"-MODEL 1873-" in fancy letters with foliate devices at either end. The serial number "571224B" is stamped in script numerals on the lower tang between the lever latch and the upper tang screw. This musket is one of approximately 700 Model 1873 Muskets shipped from Winchester to Nicaragua in September 1903. Some of these muskets were apparently never uncrated. During the 1950s a few of these Model 1873 Muskets were discovered in the original crates in un-issued condition and were returned to the United States for resale.

Near new. The musket is as-issued condition with at least 99% of the bright original blue, casehardened and nitre blue finish. Wear is limited to some minor scuff marks on the heel of the buttplate. The barrel and receiver markings are perfect. The stock and forearm both remain in near new condition; wear is limited to several very minor storage marks. This Winchester Model 1873 Musket would be extremely difficult, if not impossible, to improve upon. 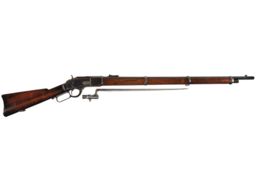 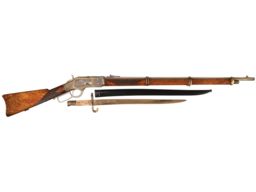 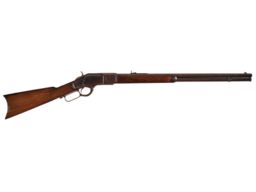 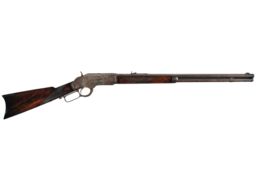 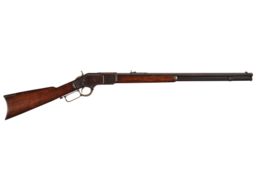 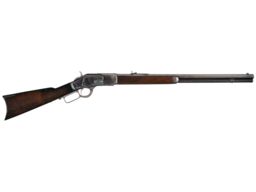