Prior to the development of the Winchester Model 1868 musket, Winchester had established a relationship with the Swiss government. The Swiss government had purchased 200 Winchester Model 1866 Swiss Sharpshooters rifles. These rifles were a joint venture between Winchester and Weber-Ruesch of Zurich, Switzerland. Winchester manufactured the receiver and lock work and Weber-Ruesch manufactured the barrel and stock. Deciding to capitalize on its relationship with the Swiss, the Winchester board of directors decided to design a long arm that met Swiss military specifications for a cartridge service rifle. This prototype rifle became the Model 1867, and about 100 were ordered by the Swiss. Ultimately, Winchester lost the Swiss military contract to Vetterli's bolt action rifle. However, the company's board members saw value in continuing to develop an iron frame rifle for the commercial market to replace its then relatively new and internationally highly successful brass frame Model 1866. This is where the story of the Model 1868 begins. Generally speaking, the Model 1868 was an improvement over the Model 1867. The Model 1868, both rifles and carbines, competed at trials in England and France. The Model 1868 performed well during these examinations. In the English trails, for instance, the 1868 performed well in all tests except when it was exposed to sand. Despite its outstanding performances at trials, the rifle was repeatedly rejected by military commissions who did not see any advantages gained from the adoption of a repeating rifle. Although the Model 1868 never made it to production, the rifle was the forerunner to the Model 1873, the iron frame successor to the Model 1866. Examples of the Model 1868 can be found at the Cody Firearms Museum and in at least one private collection in Switzerland. (For more development history see Herbert Houze's book "Winchester Repeating Arms Company," Chapter 1.) This example of a Model 1868 uses a steel cartridge carrier, a feature that Winchester specifically experimented with on this model. The lever latch is uncharacteristic of a Winchester design as it is a sliding stud. When moved forward, the stud engages a flat extension on the lever's upper section. The sliding stud replaced the pivoted locking catch in the rear bow of the finger lever found on the Model 1867. The rifle has an internally mounted safety sear, which was developed by Luke Wheelock and patented on December 1, 1868. Mounted in the lower tang is a pin that releases only the secondary sear when the lever is drawn up against the lower tang. The barrel has a rifling system designed by Oliver Winchester. The first 10 to 12 inches of the barrel is smooth bore. The purpose of the smooth bore section was to increase muzzle velocity and reduce fouling. Winchester patented this rifling system in England on April 17, 1869, and in the United States on June 25, 1872. There are no provisions for a dust cover. The number "18" is engraved in script on the buttplate tang and top of the receiver. A British London temporary proof in use since 1856 is stamped on top of the barrel at the breech. It is fitted with a front sight which acts as a socket bayonet lug and a ladder rear sight. A sling swivel is attached to the middle barrel band and underside of the frame ahead of the lever. Mounted with a smooth full length musket stock with crescent buttplate featuring a trap compartment (cleaning rod not included).

Excellent. The rifle retains a left in the white bright appearance overall. The wood is also excellent with a few minor handling marks. Mechanically fine. A chance to own a piece of evolutionary history in the development of the Winchester lever action rifle! Provenance: Robert M. Lee Collection. 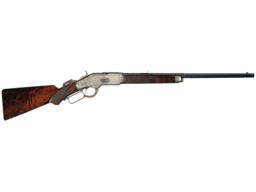 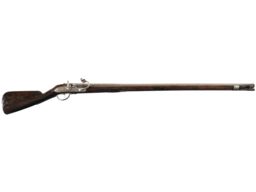 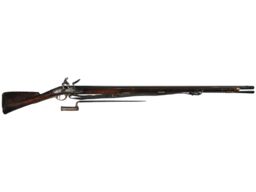 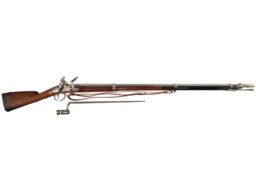 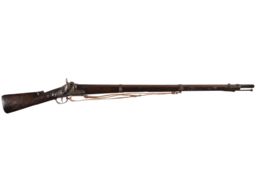 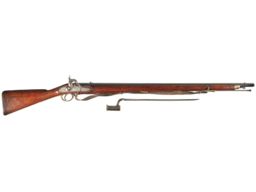