Manufactured in 1883, this special order Winchester Model 1873 lever action deluxe short rifle features factory exhibition special order features and finish and is inscribed to Robbie Campbell Adams as presented by Wild West legend and showman Buffalo Bill. According to renowned firearms expert and author R.L. Wilson, Robbie Campbell Adams was the 12 year old son of Wild West Show pamphlets publisher for the performance at Madison Square Garden. It was in 1883 that Buffalo Bill founded "Buffalo Bill's Wild West", a circus-like extravaganza that toured widely for three decades in the United States and later throughout Europe. A highly popular form of entertainment during the late 19th century, the show employed Native Americans and cowboys performing in elaborate productions, which helped to solidify the legend of the American Western Frontier that still resonates today. During its existence, the show featured performances by people who are forever synonymous with the Western frontier and include such notables as Buck Taylor "King of the Cowboys," Annie Oakley, Frank Butler, Sitting Bull, Johnny Baker "The Cowboy Kid," Rough Rider Billy McGinty, Pawnee Bill, Dr. William Frank Carver, Montana Frank and Calamity Jane. In the winter of 1886, the show was retooled for a four act indoor performance at Madison Square Garden. Through the use of high tech 19th century special effects, the arena was transformed into the Western plains, complete with a tornado that, in the words of one reporter, "roar[ed] as if 100 buildings had simultaneously crashed to the ground." Famed American novelist Mark Twain admitted, "[The show] brought vividly back the breezy wild life of the Great Plains and the Rocky Mountains, and stirred me like a war-song." The rifle is pictured and described in R.L Wilson's books "The Book of Winchester Engraving" (page 184), "Antique Arms Annual" (page 134, formerly of the James S. Fowler Collection) and "Buffalo Bill's Wild West: An American Legend" (pages 47-48). Wilson identified the engraving as being executed by an Ulrich. (Included with the rifle is a 1983 dated letter from R.L. Wilson expressing interest in receiving better photos of the rifle from noted collector and former owner of the rifle Ken Karnak.) The rifle is listed by serial number in James Gordon's book "Winchester's New Model of 1873" (page 460). The receiver has beautifully engraved scrollwork on a dot background and fine borders. The left side plate has a presentation inscription inside a double line oval surrounded by scrollwork. The inscription reads, "Presented by Buffalo Bill (W.F. Cody)/to/Robbie Campbell Adams/1883." The right side plate has a highly detailed game scene in a circular panel depicting a hunter taking down a stag. The lower tang is signed "J. ULRICH". The rarely encountered special order 22 inch barrel is fitted with a combination Beach front sight and an elevation adjustable rear sight. The top barrel flat is marked with the two line Winchester New Haven address and New King's patent dates ahead of the rear sight and "32--CAL" at the breech (partially covered by the rear sight). The receiver has the third model dust cover and rail. A Winchester "WP" proof is stamped on the upper left barrel flat and upper left side of the frame at the breech. Note that the "WP" proof first appeared on Model 1873s around the 360,000 serial number range and became standard after 600,000. The appearance of the factory proofs points to the rifle being returned to factory (reason unknown). Gold plated frame, dust cover, forend cap and buttplate with the remaining surfaces silver plated. Mounted on a special order, highly figured, deluxe walnut pistol grip stock with checkering, ebony insert on the bottom of the grip and shotgun buttplate. The accompanying factory letter from December 1967 confirms the rifle configuration, caliber, 22 inch long barrel, checkered pistol grip stock, shotgun butt, plain trigger, engraving and gold plating (frame, forend cap and buttplate). The rifle was shipped on April 6, 1883. Note that the rifle was shipped the same year that Buffalo Bill introduced his Wild West show. In the included hand written letter from 1955, Tuppie B. Seymour states that the rifle was given to her by her brother-in-law, Robbie Campbell Adams. Other correspondence included with this lot provide an early history of ownership that dates back to the 1950s. The ownership of this rifle has included noted firearms experts and collectors and the ownership is as follows: William "Buffalo Bill" Cody, Walter C. Adams, Tuppie Seymour, Howard Corliss, William O. Sweet, Herb Glass, James Fowler, Greg Martin and Ken Karnak. The rifle has been displayed at the Connecticut State Library, Winchester Repeating Arms Co., Mass Arms Collectors Association, Texas Gun Collectors Association, Tennessee Gun Collectors Association, California Arms Collectors Association, Sahara Gun Show, Texas Ranger Hall of Fame and Museum, Montana Arms Collectors Association, Buffalo Bill Museum, Corpus Christi Antique Gun Show and Texas Ranger Gun Show. After Corliss received the gun in 1955 directly from Tuppie Seymour, he stated in a letter (included), "It is far more beautiful than I dared to hope it should possibly be…For the first time in our six years of gun collecting, Dale and I know we have a gun that will be recognized as one of the top collector items." Corliss went on to say, "Two blanks are all that have ever been fired in it and those by his nibs Buffalo Bill, himself." In an included grouping of correspondence we see that Corliss offered the rifle for sale in 1956. The rifle was ultimately purchased by William Sweet, but others who were interested included John du Mont, Herb Glass, Maurice Clark and Lloyd Bender. Du Mont apparently turned down the sale, and by a gentleman's agreement the offer was extended to Sweet. At the time of the sale, du Mont listed the price of the rifle as high as $1,500 (about $13,500 in today's money). Herb Glass later obtained the rifle. Note that the 1967 factory letter mentioned above was addressed to Glass. 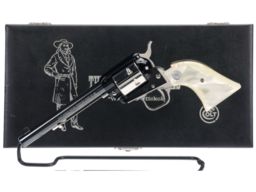 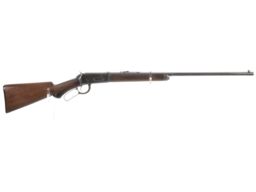 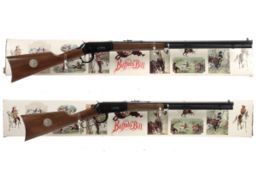 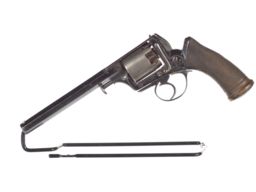 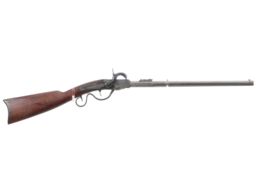 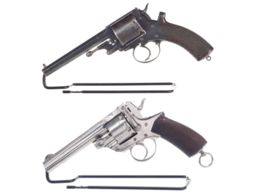