This is a rare example of a WWII German Prototype sheet metal semi-automatic rifle that was manufactured by Gustloff-Werke in Weimar. This design closely follows the various other late war German designed rifles and pistols that were manufactured using sheet metal stampings and minimal machined parts. There are no other manufactures markings or firing proofs and the only real identification is the markings of "206/13", which is heavily engraved/stamped on top of the receiver ring. These markings probably indicate Model 206 and serial number "13", as it has the same serial number "13" also stamped on the gas block and gas tube. It is interesting to note that instead of a typical bolt action sheet metal rifle, this example is a semi-automatic version, which is rarely seen, as the mechanics of getting a semi-automatic rifle to function properly are considerably more difficult than a bolt action rifle. In describing the rifle, the receiver itself was manufactured as a single large stamping that was then run over a forming die into the shape of the receiver which was then welded all along the upper and lower rear section. It was then riveted on the underside to sheet metal trigger housing. It is fitted with a standard steel K98 type barrel with a short round machined barrel extension on the end that was pressed into the front section of the stamped receiver. Instead of being pinned in place, the top of the sheet metal receiver ring was just deformed into a couple recesses located in the top of the barrel extension. The barrel has a small gas block mounted on the underside, just over halfway down the barrel. Attached to the underside of the gas block is a hollow steel gas tube, which runs halfway down the barrel. The right side of the receiver has a square operating rod/cocking handle attached to the bolt, with a round front section (similar to an M14 rifle), that obviously the front section fits inside the gas tube. The rear of the barrel has both a sheet metal cover on top of the barrel and also on the underside. The rifle is fitted with an all machined bolt, that has two opposing locking lugs on the front end similar to a G/K43 bolt with the bolt mounted inside a sliding, stamped sheet metal cover. It appears that all the other internal parts are made from stampings also. It is fitted with a highly modified, MG15 magazine. It also has a short walnut forend that covers the metal shroud under the rear of the barrel that acts more like a heat shield. The buttstock assembly is actually very unique just like the rest of the rifle in that it has a hollow stamped sheet metal buttstock/receiver extension that has two thin wooden covers on the outside to act like a buttstock, that are held in place by two cross screws.

Fine overall with the phosphate metal finish having browned out with only edge and high spot wear. The forend and stock covers are all in very good condition with their original dark brown color overall showing only minor handling marks and scratches from use and display and some cracking at the wrist. Mechanically excellent. 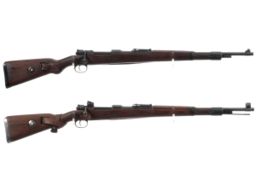 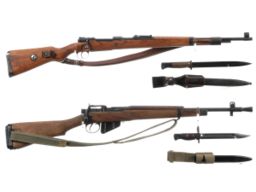 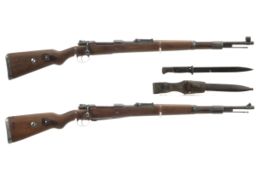 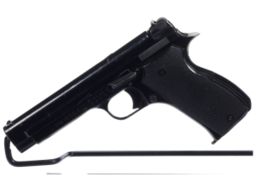 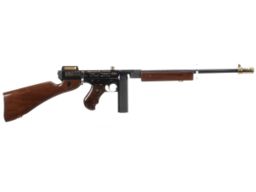 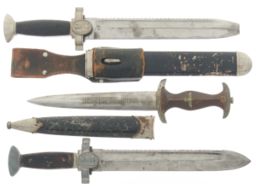