The extraordinarily rare and desirable carbine was manufactured in 1898 as an exhibition piece. American firearms expert R. L. Wilson identifies the engraving as the work factory master engraver John Ulrich in the included letter and also states it was used at various exhibitions and displays. His evaluation notes that carbines were seldom engraved or received special finishes and confirms this carbine is distinguished by the rare combination of gold and nickel plated finish, deluxe checkered wood, factory engraving, and full documentation. Wilson notes that carbine #114695 (the consecutive gun to this example) is identically engraved and was also used by Winchester at various shows. The unique matching pair traveled together to some of the events given the matching shipping dates. The stock and forearm are “XX” fancy grade walnut with feathered figure Winchester Style "H" checkering and a high polish piano finish. The receiver, bolt, and buttplate are factory engraved with scrollwork similar to Winchester No. 4 engraving. The left side of the receiver features a game scene that depicts a whitetail buck and doe in a forest setting, a panel scene not depicted anywhere in Wilson’s two books on Winchester engraving. A rarely seen S-scroll device is incorporated as part of the receiver engraving above the loading gate that Wilson indicates is a clear sign of the influence Gustave Young had on the Ulrich family’s engraving styles. The accompanying Winchester factory letter confirms the configuration, including the nickel and “gilt” finish and engraving. The letter notes this was a “show gun or sample,” states it was originally received in the warehouse on August 16, 1899, shipped on out on April 17, 1901, (odd given some dates listed below are earlier), and then “loaned out” on the following dates: Jan. 20, 1900; June 20, 1900; Dec. 4, 1901; March 29, 1902; March 14, 1904; Dec. 20, 1904; Dec. 21, 1904; Jan. 16, 1905; April 6, 1905; February 1, 1906; March 12, 1906; Oct. 2, 1906; Jan. 4, 1908; Feb. 27, 1908; March 4, 1910; and April 7, 1910. The letter also indicates it was sent on the following dates for “sample consignment”: Oct. 20, 1910, to Ambold Sporting Goods Co. in Waco, Texas; Jan. 10, 1911, to F. H. Siefren in Milwaukee, Wisconsin; Feb. 24, 1912, to G. A. Davis “% WRA Co. of NY Inc.” (G. A. Davis is listed as the manager of the Atlantic Shipping Co. in New York suggesting the rifle was headed overseas); and June 21, 1912, “to Exhibition Showcase, Auditorium.” Many of these dates line up with the major world’s fairs and other international exhibitions of the early 20th century, including: Exposition Universelle in Paris (April-Nov. 1900), Pan-American Exposition in Buffalo (May-Nov. 1901), St. Louis World's Fair/Louisiana Purchase Exposition (April-Nov. 1904), Exposition Universelle et Internationale de Liège (April-Nov. 1905), Milan International Exposition (April-Nov. 1906), New Zealand International Exhibition in Christchurch (November 1906-April 1907), Franco-British “Great White City” Exhibition in London (May-October 1908), Exposition Universelle et Internationale in Brussels (April-Nov. 1910), International Mercantile Exposition in New York (1911), and Latin-British Exhibition at the "White City" in London (1912). At some events, such as the St. Louis World’s Fair, Winchester had multiple exhibits. Displays by American companies were not seen simply as advertisements but as patriotic symbols of American ingenuity and manufacturing prowess. Prominent companies were encouraged to participate at the various events around the world. The pre-WWI world fairs were massive events attended by millions and widely covered in the press. The carbine features the standard block style front sight, folding rear sight, “MANUFACTURED BY THE WINCHESTER REPEATING ARMS CO./NEW HAVEN, CONN. U.S.A. PAT.OCT.14.1884.JAN.20.1885." in two lines ahead of the rear sight, "45-90/W.C.F.” at the breech, standard “WP” proofmarks at the breech, a saddle ring and stud on the left, standard “-MODEL 1886-“ model designation on the upper tang, and the patent markings and the serial number on the lower tang. Winchester would have happily added the “WP” proofmark when it was introduced in 1905 since they proudly proclaimed the marking was the “Hallmark of Quality.” It is perfectly normal for exhibition guns to have been maintained by the factory since they were handled potentially millions of times at a single event. The St. Louis World Fair, for example, recorded approximately 20 million visitors and the Exposition Universelle in Paris recorded approximately 50 million! We can only imagine the effect this fine carbine had on Winchester’s sales as an untold number of individuals from varying backgrounds viewed it.

Very fine. The carbine retains nearly 90% of the factory gold and nickel plated finish. The gilt finish on the receiver shows only slight edge wear. There is light-moderate finish wear on the sides of the barrel bands and buttplate heel and toe. The intricate scroll and border engraving, highly detailed game scene, and the markings remain crisp. The bolt, hammer, trigger, loading gate and lever have nearly all of the nickel plated finish. The barrel and magazine have a 1 inch wide band of pitting and finish loss immediately in front of the forearm caused by a leather strap used in displaying the carbine as noted in the letter by one of the rifle’s former owners. The wood is in very fine condition and retains nearly all of the high polish piano varnish. The checkering is crisp and displays minimal handling wear. This is an attractive example of a rare deluxe, John Ulrich factory engraved, fully documented, Winchester Model 1886 carbine manufactured specifically for display at various international exhibitions. Exhibition firearms are among the most desirable of all American and international firearms. Colt, Winchester, and other firearms companies went all in when creating their extravagant display pieces to astonish potential clients and try to outshine international competitors. Provenance: Robert M. Lee Collection. 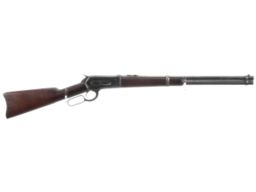 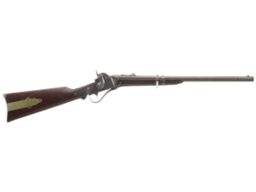 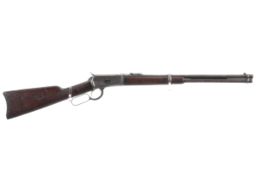 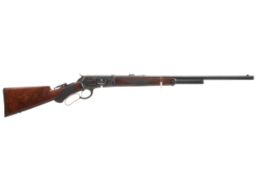 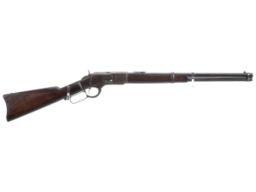 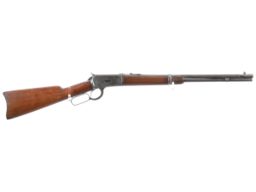