Manufactured in 1872, this is a desirable and fine example of a martially inspected Winchester Model 1866 lever action musket. The crisp script letter cartouche ("GHJ") is stamped on the left side of the buttstock. The Winchester Model 1866 musket was not documented to have ever been obtained by the U.S. military, but was sold to foreign militaries (France, Turkey, Mexico and Prussia). The cartouche, which is inside a ribbon, is indicative of "AOS" cartouches found on Argentine proofed 1866 carbines in the 135,000 to 148,000 serial number range. According to noted Winchester expert George Madis, "To date, no concrete evidence has appeared to explain the meaning of [AOS] markings." The same can be said about the cartouche found on this musket. The top of the barrel is marked with the two-line address/patent dates ahead of the rear sight and a small letter "J" at the breech. Fitted with a square base front sight/bayonet lug and a folding ladder rear sight graduated to 900 yards. It has the 7/8 magazine tube with three barrel bands. The middle barrel bands has a sling loop and the corresponding loop is located on the underside of the buttstock. The serial number is marked behind the trigger. The lower tang is marked with the small letters "PS." The wood is nicely figured straight grain American walnut with 3/4 length forearm and straight grip stock. The buttstock is fitted with a brass buttplate featuring a trap compartment. The four piece cleaning rod is included.

Very fine. The musket retains 70% plus original blue finish with the balance thinning to a brown. The crisp brass has a highly attractive aged patina. The loading gate retains 60% original nitre blue. The hammer and lever have patterns of case colors with the balance a smooth dark brown patina. The reoiled wood is fine with a couple gouges from the barrel bands, a repaired chip near the buttplate tang and a few minor dings and scratches. The cartouche is sharp. The action is tight. 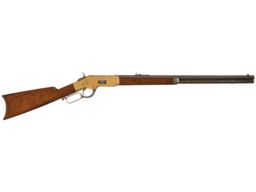 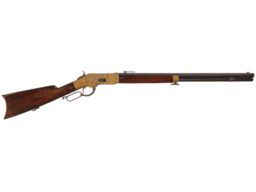 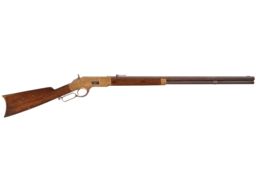 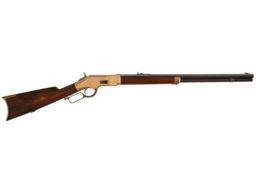 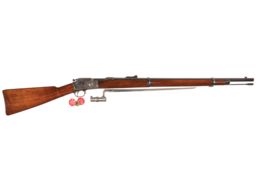 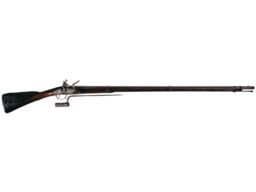