This is just a beautiful example of a super rare one-of-a-kind Winchester Model 1883 prototype revolver. Around 1874/75, Winchester began development work on new revolvers intended for both commercial and military contracts. Enter two of the most inventive and least known designers at this time Stephen Wood and William Mason. Both had worked in the firearms industry for several different companies for over 10-15 years and had developed significant patents for both rifles and pistols. Stephen Wood worked for Winchester earlier on and actually held the patent for the solid frame on revolvers along with a rapid ejection design. William Mason was an independent contractor making Springfield type rifle-muskets during the Civil War and worked at both Remington Arms and Colt (1872-1882) before being hired by Winchester. While at Colt, Mason was issued several patent related to the commercially successful 1873 Peacemaker revolver. Therefore, when Winchester hired Mason, one of his tasks was to develop a revolver that was almost identical to the Colt Single Action Army revolver that would have allowed Winchester to produce a competing revolver at a much lower cost than Colt, which had the possibility to beat out Colt. Supposedly, in a 1884 meeting between Winchester and Colt, Winchester showed Colt the new Winchester designed revolver, and shortly after that both companies agreed to non-compete with each other but reserved the right to design and produced prototypes for patent work development. This "gentleman's agreement" has since been maintained with each company staying out of the other's respective sector of the firearms market. This wonderful example is attributed to William Mason and comes with a letter from the Winchester museum curator Herbert Houze dated Nov. 2003. In the letter, he notes that they have a drawing similar to this revolver (Winchester drawing number 16882) attributed to William Mason that is identical to this revolver except for the grip shape. This would not be uncommon as most engineers would design several different grip shapes with the same basic frame style, especially in the prototype stage. If you study the design of this revolver, it is almost identical the Colt Model 1878 revolver in that it employs a double action mechanism, a solid one-piece frame with the solid top strap, a removable trigger guard and a small removable round side plate. It is also chambered in 45 LC, which was one of the bigger selling points for the Colt revolver since it used a larger caliber cartridge. The other interesting aspect of this revolver is that it uses a Model 1875 Remington barrel and ejector system. The barrel has the Remington address. The rational for this, as noted by the Winchester curator, was that Winchester used a lot of various revolvers for ammunition testing; hence, they may have just used a barrel from a Remington pistol to speed up the prototype/design work of the frame portion. Now, I am sure you are wondering why would Winchester design this revolver if they weren't actually going to manufacture it? As you may recall from the earlier agreement, Winchester was still able to produce prototypes for patent development. What better a way to make money than to use your lead design engineer, who worked at the Colt factory for almost 10 years, to design pistols to sell to your competitor and/or us to threaten selling it to one of Colts competitors, i.e. Remington Arms. This could have also been used to glean a royalty payment from your competitor. Regardless of the actual background, this revolver is absolutely just stunning. It is exceptionally well made, and the internal double action mechanism works perfectly and is as crisp as when it left the factory. There are no Winchester markings on the revolver except for a script engraved letter "M" on the underside of the trigger (maybe this is William Mason's way of marking his prototype revolvers), and it is fitted with a set of fancy burl walnut grips. The revolver is completely in the original "in the white" factory finish and looks like it was never fired as the bore is excellent with no firing residue anywhere. This revolver comes with the curator letter noted above and copies of the two Winchester drawings (No. 16882 and No. 16887). No. 16887 is for a drawing submitted to the U.S. Patent Office in February 1883 for a lever action rifle that was patented on September 16, 1884, and is in Mason's name. No. 16882 is a Winchester revolver drawing that Houze dated to late January or early February 1883. A copy of the 2003, 1st Quarter issue of the "Remington Society of America Journal" which includes pictures and descriptions of the revolver. 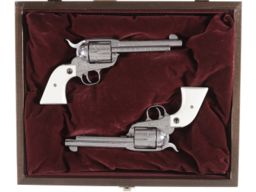 Lot #65: Pair of "One of One Thousand" Ruger New Vaquero Revolvers 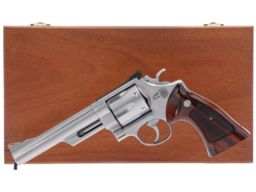 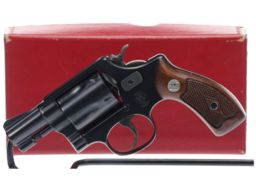 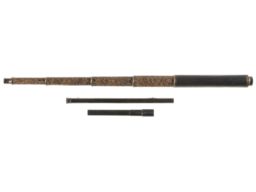 Lot #604: Group of Two Scopes and One Telescope 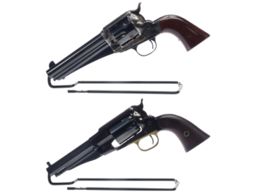 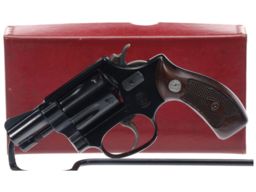