This is a rare example of a Colt prototype zig-zag cylinder percussion revolver. The sidehammer design is reminiscent of the highly successful Model 1855 revolver Colt manufactured from 1855 to 1870. In fact, Colt experts have linked this revolver and its other known "sisters" to the Model 1855 or "Root" as it is known to collectors. This revolver is one of a few known prototype zig-zag cylinder sidehammer percussion revolvers that preceded the Model 1855. Similar revolvers have been pictured and described in several publications. In James Serven's "Colt Firearms: 1836-1958" a zig-zag cylinder revolver with the hammer on the left side is pictured and described on page 126. When the book was published in 1959, the revolver was part of the Colt collection at the State Library, Hartford, Connecticut. Other similar prototypes are pictured and described in R.L. Wilson's "The Book of Colt Firearms" (page 146 and 149) and "Colt: An American Legend" (page 77). The revolver shown in Serven’s book is the closest example we have found that mimics the design of the revolver offered here. The identity to the Model 1855 under the name "Root" gives E.K. Root (1808-1865) credit as the designer of the Model 1855. Although Root has been given credit for inventing the Model 1855, there is only one patent for this type of revolver in his name and the remainder patents are in Colt’s name. This fact has left many to conclude that Colt was the true inventor of the Model 1855, not Root. Nevertheless, Root was a key figure in Colt company history. In 1849, Samuel Colt hired Root as a superintendent at the Hartford factory. While there, he perfected the Lincoln miller milling machine. 150,000 of the machines were sold in the 19th century, making it the most important machine tool of the era. He also modernized firearms production by designing state of the art drop hammers, boring machines, gauges and jigs. After Colt died in 1862, Root took over as the President of Colt's Patent Firearms Co. until his death September 1, 1865. The sidehammer revolver patent in Root’s name is no. 13,999, which is dated December 25, 1855, and is for an improvement in a type of zig-zag cylinder design similarly found on this prototype (see Haven and Belden's "A History of the Colt Revolver," page 584). The top strap is slotted to accept a sliding cam that is operated by the hammer. Once engaged, the sliding cam cycles the action by "working in longitudinal and diagonal grooves cut" in the cylinder; hence, the name zig-zag cylinder. The grooved cylinder design ultimately proved impractical. The revolver is marked "COLTS PATENT" in italics on the left side of the top strap. It features a pin front sight, a hammer mounted on the left side of the iron frame, a creeping loading lever and two-piece metal grips. The frame and barrel are blue, the loading lever and hammer are casehardened, and the cylinder is left in the white.

Very fine. The barrel retains 90% original blue finish, and the frame retains 40% original blue finish with the balance a smooth gray patina. The cylinder has a left in the white appearance. The hammer and loading lever retain 30% original case colors. The grips have a smooth dark patina with a large dent on the left side. Mechanically fine. This revolver is a physical link in the development story to the Model 1855, Colt’s only percussion handgun built on a solid frame design that went on to reach a total production of approximately 40,000. Do not miss your chance to own a piece of Colt history that is rarely seen outside factory or museum walls. 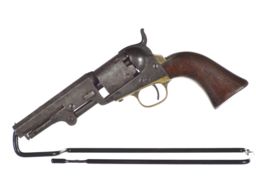 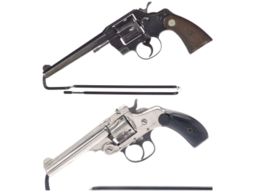 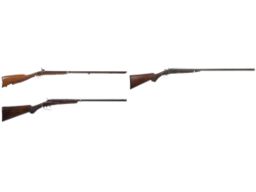 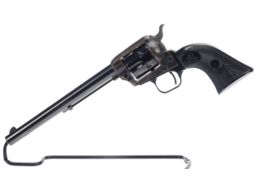 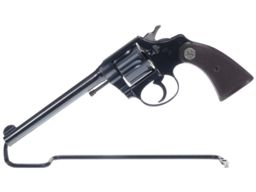