Patented in 1920, the Jo. Lo. Ar. Pistol is an upgraded version of Arrizabalaga's Sharp Shooter with two mechanical differences. First, is the installation of an extractor, and the second is the installation of a side lever, or palanca, as its inventor Jose de Lopez Arnaiz referred to it. Arnaiz, a Spanish gun dealer, sold Arrizabalaga on the idea of the folding lever, which would permit operation of the slide with the shooting hand. As the Sharp Shooter lacked any mechanical safety mechanisms, this upgrade was advertised as both a convenience and safety upgrade. The arrangement had Arrizabalaga producing the gun, and a company set up by Arnaiz building and installing the levers. Around 30,000 of these palanca-equipped firearms were sold in 9mm before Arnaiz broke off relations for unknown reasons. The main overseas purchaser was the Peruvian Mounted Police, who found the one-handed operation very functional on horseback. This pistol is much more scarce than the standard 9mm. Equipped with a fixed blade front sight and notch rear sight on its hinged, fluted barrel. The slide is equipped with the palanca, the face of which is checkered. The left side of the slide is roll stamped "PISTOLA "JO. LO. AR." EIBAR (ESPANA)/ANO 1924 PATENTES Nos. 68028 Y 70235". The left side of the frame is marked "CAL 45" followed by standard Spanish proofs and the serial number. Fitted with a checkered barrel catch and contoured, checkered hard rubber grips with "JO.LO.AR." in banners at the top. 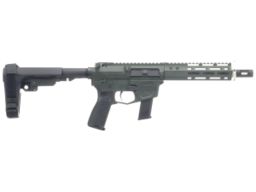 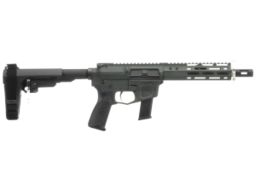 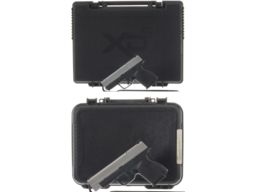 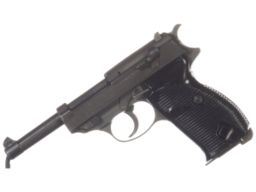 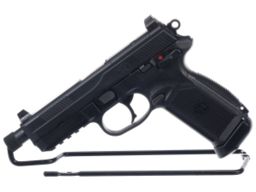 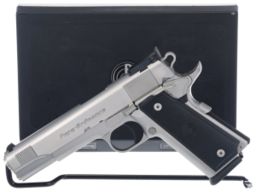