Originally patented in 1944 by Stanley M. Haight, the Sedgley Fist Gun, also known by the nomenclature "Hand Firing Mechanism Mark 2", has been the subject of great speculation and a certain amount of fantasy about its intended purpose and end users; some sources describe it as a Office of Special Services weapon or a clandestine assassin's gun, and they were recently featured in the film "Inglorious Basterds" (sic) being used by two of the titular commandos to eliminate a pair of Nazi sentries. Per the original patent, Haight's pistol was designed with the regular soldier in mind first and foremost. Citing the prevalence of sneak attacks and hand to hand combat in warfare, Haight designed a weapon that could be ready and at hand at all waking hours, so even if a soldier was caught unaware or while separated from his regular service weapon, he could simply ball up his fist and make a good, loud response. Additionally, the original patent points out that any concealability was secondary to speed of deployment and actively sought to distinguish the pistol from sneak guns like the Juhasz sleeve pistol or the Woods watch gun. Documentation of actual use in the field is virtually non-existent, but reports of them having been used by Navy Construction Battalion (Seabee) men operating heavy equipment like boats or tractors have emerged. The actual weapon is of blued steel construction and mounted to a curved steel plate, which bears a "US/anchor" stamp and the Sedgley nomenclature. For firing, a spring loaded plunger runs about to the first knuckle on the middle finger, with a parallel single shot barrel about an inch shorter and a small manual safety; making a fist takes the fingers out of the way and exposes the plunger, which you then jam into your would-be ambusher's nearest body part, promptly discharging the 38 caliber round at near-contact distance. If this seems like a mean-spirited way to deal with another human being, keep in mind that the original patent called for a 410 gauge shotshell instead of a 38. The glove is a fairly standard leather work glove with a faint "US/anchor" ink stamp on the cuff and a leather interior pad to protect the back of the wearer's hand from the bolts holding the pistol to the glove.

Fine with 70% of the original blue finish showing a bright patina and some mild spotting along the edges as well as a few light handling marks. The barrel catch is absent, and the safety is a bit touchy about proper firing position. Needs work in order to function properly. The glove is very good with minimal wear and a few verdigris spots. A scarce and interesting piece of niche military hardware produced in limited numbers and tough to find in any condition. 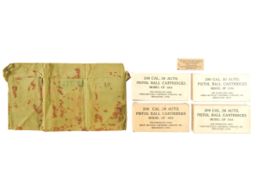 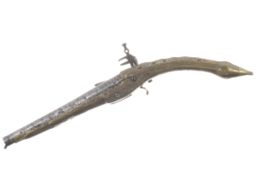 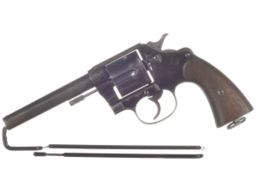 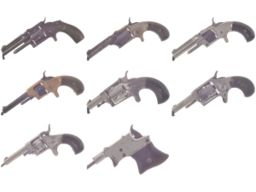 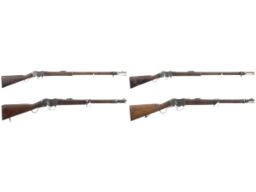 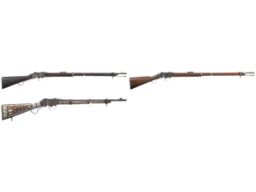