This master engraved rifle has the standard dovetail front sight and adjustable rear semi buckhorn rear sight. The two line address/patent date on top of the barrel has a simple border and scroll engraving at the ends. There are two gold bands around the muzzle and border and scroll engraving around the "44WCF" at the breech. The gold washed action is scroll engraved with a deer head on the right side, a deer running on the left side, "WINCHESTER 73" in a banner on the left side plate, "44CAL" in a banner amid scroll and "B. LANE - EN" in a banner amid scroll on the underside of the action. The upper tang is marked "MODEL 1873" and the serial number is on the lower tang. The sides of the lever and hammer are also engraved. The action and forend cap are gold plated, while the remainder of the rifle is blue. Checkered custom 3X fancy fiddleback walnut forearm with scroll engraved forend cap and straight grip stock with a metal crescent buttplate with scroll engraving on the heel. The rifle is accompanied with a letter from Ben Lane Jr. dated Aug. 18, 1989 to an individual briefly explaining that the rifle was once owned by Charles "Tex" Crosset who was a Texas Ranger and Deputy Sheriff in several Texas counties in his lifetime. It was purchased from his widow in 1964 and the rifle was engraved and restocked to its present state in 1968. A beautiful master engraved and gold inlaid Winchester Model 1873.

Very fine as custom embellished. Master refurbished with nearly all of the blue finish remaining with a couple of very small areas of surface rust on the barrel, and very slight scattered handling marks. 70% of the gold finish remains with thinning on the bottom and sides of the action, the tangs, sharp edges, with the worn areas turning silver. The wood is also very fine with very slight scattered handling marks. The action is fine. 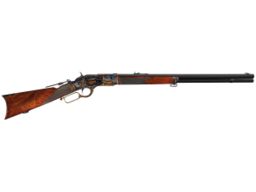 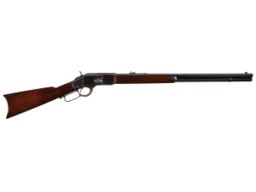 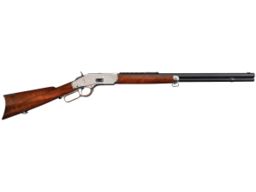 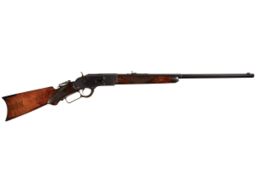 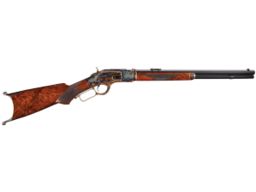 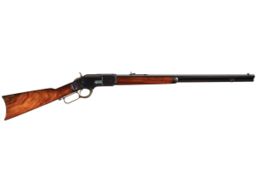