This is a very rare example of an Krnka-Roth Model 1895 semi-automatic pistol serial number "77" with the unique decocking lever and desirable grip safety. This pistol design was a combined effort between Karl Krnka with his rotating bolt and barrel design and Georg Roth, who owned an ammunition company in Vienna(where he worked as a young engineer for several years), and even Rudolf Fromer of the Hungarian firearms company (FEG). This rare model has the same general size and frame configuration as the earlier models except it has a much shorter barrel. It still used the same rotating barrel and bolt, and this specific example has the noted unique decocking lever on the right, rear side next to the hammer and a rare "front" grip safety on the right side of the frame. This decocking lever is very unique in that it allows the hammer to be lowered into a safe position and when the grip safety is pulled along with the trigger, the hammer would rebound backward slightly until released by the sear. It also has a bolt release on the left side of the frame. It has an internal non-detachable magazine design that is loaded through the top of the pistol via stripper clips, and after the last shot is fired, the bolt remains open to allow a new stripper to be inserted. The top of the barrel rib is marked with a small "GR" mark inside a circle followed by "PATENT" which may indicate that this is the exact patent model pistol. The only other markings on the pistol are serial number "77" over the chamber and left side of the trigger. It has a interesting frame design in that it has a full length side plate on the left side that is held in place on the front end of the frame by a single locking latch. When this latch is rotated, the entire side plate can be removed to expose all the internal parts. It has a rust blued finish on the outside of the pistol with all the internal parts/components, including the breech bolt, hammer and grips safety, all left in the original, factory bright "in the white" polish. It is fitted with a set of checkered walnut grips and has a lanyard stud on the butt of the frame along with its original lanyard ring.

Excellent with 95% plus of the blue finish overall with edge and high spot wear with all the markings clear and sharp. The grips are also in very fine condition with nice distinct checkering on both sides showing light wear across the tops of the checkering with only a couple of very minor handling marks on the sides. This is a very unique, early prototype type designed pistol that is rarely seen. 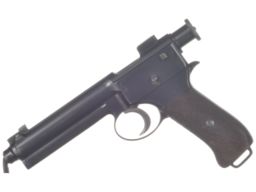 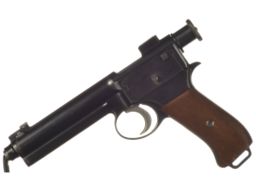 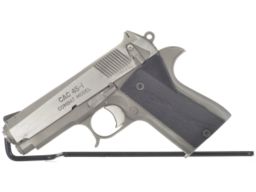 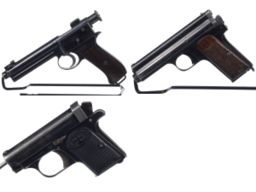 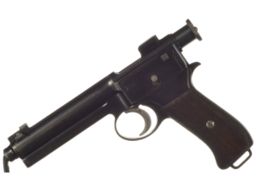 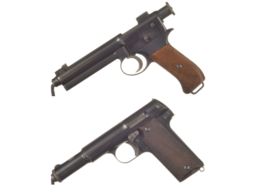